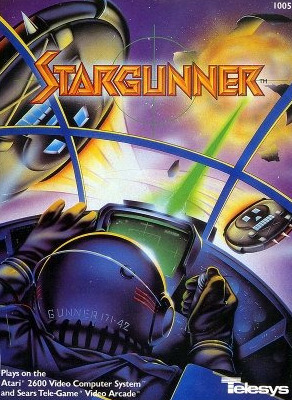 Stargunner is a 1996 horizontal scrolling shooter computer game published by Apogee Software and released for DOS and Windows.

The player controls a craft on a horizontal perspective going to the right. Enemies can approach from in front, from behind, from below or from above. They can be either lone flyers or formation ships. The maps have a linear quality in which enemies and power-ups appear at the same time and the same place, as is common with side-scrolling shooters. Gameplay is notably differentiated by high numbers of enemies and power-ups.

The game has two separate storylines; those being the one described in the official playing manual included with the CD-ROM copy and the one which is found on the 3D Realms/Apogee website and portrayed in the game itself.

The game was programmed in the C++ language. The artwork was done on a Commodore Amiga computer using Deluxe Paint.

According to David Pevreal Apogee had originally intended to do an Amiga version of the game first and then port it to PC, but those plans were scrapped and only the PC version was released. On June 22, 2005, Stargunner was released as freeware.