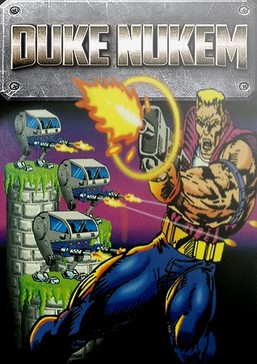 Duke Nukem is a 2D platform game developed and published by Apogee Software, featuring the adventures of the fictional character Duke Nukem. The game was followed by another 2D scroller, Duke Nukem II, in 1993. The series made the jump to 3D graphics with Duke Nukem 3D in 1996, which became the most popular of the three games.

The main objective of the game is to get to the exit of each level, while destroying enemies and collecting points. Many objects onscreen can be shot including boxes, obstacles and blocks. Besides points, some collectibles include health powerups, gun powerups, and some inventory items with special abilities. The final level of each episode has no exit, and is instead completed by finding and defeating Dr. Proton.

At the end of every level (with the exception of the last level in each episode), the player can receive up to seven 10,000 point bonuses, earned by making certain achievements in the level, such as destroying all cameras. At least two other Apogee titles, Duke Nukem II and Rise of the Triad, have similar end-of-level bonuses.

The game is set in the year 1997. Dr. Proton is a madman, determined to take over the world with his army of Techbots. Duke Nukem, the eponymous hero, takes upon the task of stopping him. The first episode takes place in the devastated city of Los Angeles. In the second episode, Duke chases Dr. Proton to his secret moonbase. In the third episode, Dr. Proton escapes into the future, and Duke pursues him through time, to put an end to his mad schemes.

According to programmer and co-creator Todd Replogle, John Carmack helped him program some low-level parts of the game code in assembly language.

Due to technical limitations the game world scrolls by shifting 8x8 "blocks" rather than individual pixels. Similar techniques are used in e.g. Zeliard, Cosmo's Cosmic Adventure and Duke Nukem II. Console and arcade platform games would typically perform this using dedicated hardware, such as the PPU in the NES which can scroll the background.

The graphics borrowed heavily from other games, such as Turrican and the MS-DOS version of Mega Man.

Legal concerns with the game name

After the game's release, Apogee Software became aware that the Captain Planet and the Planeteers animated series featured a character with the same name (Duke Nukem) and therefore to avoid a lawsuit, the software house renamed the 2.0 version of its game Duke Nukum. It later turned out that Duke Nukem was not a registered name, so Apogee registered it and used the original Duke Nukem name in the sequels.

All games from the serie "Duke Nukem"