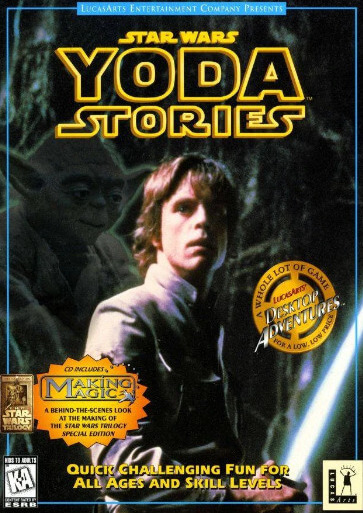 Star Wars: Yoda Stories is a 1997 adventure video game based on the Star Wars franchise developed by LucasArts. It was preceded by Indiana Jones and His Desktop Adventures. In the Star Wars timeline, Yoda Stories is placed between The Empire Strikes Back and Return of the Jedi, and follows Luke Skywalker as he is completing his training with Jedi Master Yoda.

Levels in the game are procedurally generated. Yoda Stories has no central plot or definitive goal—it is a collection of games where the player, controlling Luke Skywalker, has to complete an objective like rescuing someone, obtaining an object, etc. Each game starts with Luke arriving at Dagobah in an X-wing. If the player is still a rookie, R2-D2 can be picked up, and dropped anytime for hints. After being found, Yoda gives Luke an assignment and an objective that Luke will be required to complete. Each game world is composed of 100 screens, but the number of active screens can be set in the options menu. To progress in the game, the player must make errands, such as finding a key or an object, until they reach the final puzzle.

The Game Boy Color version was released in 1999. Like the computer version, the gameplay is a number of simple quests, and the game contains fifteen levels. The graphics are not as detailed or colorful compared to the computer game due to the limitations of the Game Boy Color hardware, and controlling the main character is more difficult and less fluid in this version due to the lack of a mouse. With a score of 2.0/10, Yoda Stories holds IGN's lowest-ever review rating for a Game Boy Color game, alongside Tarantula Studios' Evel Knievel (1999). Computer Gaming World gave the Windows version of the game a 1-star score.