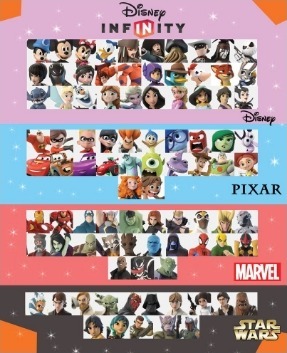 Disney Infinity 3.0 is an action-adventure sandbox video game published by Disney Interactive Studios for Microsoft Windows, PlayStation 3, PlayStation 4, Wii U, Xbox 360, Xbox One and Apple TV, and is the third and final installment in the toys-to-life Disney Infinity series. It was developed by Avalanche Software, with additional help from Ninja Theory, Studio Gobo, Sumo Digital, and United Front Games. In contrast to how Disney Infinity 2.0 focused on Marvel characters and playsets, 3.0 has a focus on the Star Wars franchise. The game was announced on May 5, 2015, and was released on August 28, 2015 in Europe and on August 30, 2015 in North America.

Disney Infinity 3.0 features similar gameplay mechanics to Disney Infinity and Disney Infinity: Marvel Super Heroes. Although sharing many key elements, the game's combat system has been redesigned to become more in-depth and complex. The game's combat system is influenced by the Star Wars: The Force Unleashed and its sequel, Kingdom Hearts, Devil May Cry, and most of the Spider-Man's aerial combat-themed video game series (except Ultimate Spider-Man). Lightsabers have been integrated into combat, due to the inclusion of Star Wars characters. Characters who use lightsabers in combat can utilize additional weapons. For instance, playable character Luke Skywalker has the ability to use a blaster and a lightsaber, which used together can juggle enemies in the air. Full combos have been integrated, which allows the player to pause mid-combo and branch off into another variation of the combo. Playable characters with the ability to use the Force, in Star Wars mythology, have the ability to push and pull enemies during combat. Special attacks, which were introduced in Disney Infinity: Marvel Super Heroes, have returned. Only the bearer of a close-ranged type weapon (such as lightsabers and other blade or staff weapons), including the characters who have their own primary close-ranged weapons (like Mulan, whose primary weapon is a staff, similar to the Jedi and Sith's own primary lightsaber), and characters who can fly are able to perform an aerial combo. Instead of waiting for a progress bar to fill up for a special attack to be performed, a new feature allows the attack to be released early, but the effects of the attack are not as strong. Auto-lock when firing ranged weapons at targets has been enhanced, so players no longer have to move closer to enemies in order to auto-lock on their positions.

Twilight of the Republic

The Twilight of the Republic Playset storyline is based on the era of the Star Wars prequel trilogy. Set during the events of Star Wars: The Clone Wars, Obi-Wan Kenobi, Anakin Skywalker, Yoda and Ahsoka Tano discover a reactivated Droid factory on the planet Geonosis. The four Jedi then decide to find out who is the mastermind behind the newly minted droid army. As the story progresses, the pair cross paths with General Grievous, Jabba the Hutt, Cad Bane, Mace Windu, Sebulba, Padme Amidala and the main antagonist Darth Maul, and travel to planets Coruscant, Naboo, Geonosis and Tatooine.

Rise Against the Empire

The Rise Against the Empire Playset storyline is based on the events of the classic Star Wars trilogy, with some differences. The playset revolves around Luke Skywalker, his sister Leia, Han Solo and Chewbacca finding themselves locked in battle with Darth Vader.

A playset based on Star Wars: The Force Awakens was announced at the 2015 D23 Expo and released in December of that year; it features Finn, Rey, Kylo Ren, and Poe Dameron as playable characters.

In the Inside Out playset, Riley falls asleep watching a horror movie and chaos ensues in her subconscious. This scatters some of Riley's memories all over Imagination Land and the emotions must find and return them to headquarters before Riley awakens.

In the Marvel Battlegrounds playset, Loki teams up with Ultron to manipulate all of the universe's heroes into fighting each other using robot duplicates while they steal one of the six Infinity Stones from the Asgardian vault. All Marvel characters from Disney Infinity 2.0 are playable in this playset, along with new characters introduced in 3.0. This is the first and only Disney Infinity play set to utilize four-player local gameplay.

In the Finding Dory playset, Dory learns of a flood at the Marine Life Institute that has washed the littlest fish into all the wrong tanks. Together with Nemo, Marlin, Hank, Bailey and Destiny, she returns to rescue them and lead them out to safety. Along the way, she makes new fish pal friends and customizes a new reef area as a sanctuary for the rescued fish.

The Toy Box Takeover expansion game follows Syndrome getting his hands on Merlin's Wand and teaming up with all the other villains for control of the Toy Box. Toy Box Takeover features six dungeon crawler-style levels that can be accessed by any playable character.

The Toy Box Speedway expansion game is a battle racing game, similar to the races in the Cars Play Set from the original Disney Infinity and the Mario Kart game series. Like its dungeon-crawler counterpart, Toy Box Takeover, any playable character may enter it.

Since Disney Infinity, there have been hints of Star Wars joining the line of games. The "ultimate unlocks" in the first two Infinity games were a lightsaber and a landspeeder, respectively. Prior to the release of Disney Infinity 2.0 in 2014, series producer John Vignocchi hinted that a future installment could have characters from Lucasfilm. The title's existence was first revealed following a leak from Chinese retailer Taobao showing potential character and figure designs for the third installment. German retailer Saturn would later leak images of the game's Starter Pack featuring the characters of Anakin Skywalker and Ahsoka Tano from Star Wars: The Clone Wars. The game was officially revealed by Game Informer on May 5, 2015.

Studio Gobo and Ninja Theory were among development groups that worked on the game's Playsets. In order to create a more complex combat system, compared to the first two installments, Disney decided to also have Ninja Theory revamp the game's combat, after LucasArts had expressed interest in working with the company.