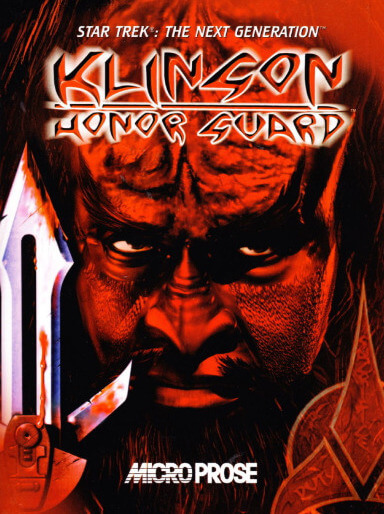 Star Trek: The Next Generation – Klingon Honor Guard is a first-person shooter set in the universe of Star Trek during the time of The Next Generation. The game was developed by MicroProse in 1998, using the Unreal game engine. The critical response to the title was generally positive with praise for the graphics, but mixed opinions of the level design.

As a new member of the 'Klingon Honor Guard', the player is given the mission of foiling a plot to assassinate Chancellor Gowron. During the course of the game, the player encounters a variety of environments, including planet surfaces, caverns, enemy ships, and space stations. Enemies include rival Klingons (including members of the House of Duras), Andorians, attack robots, Nausicaans, Letheans, and various hostile creatures. The game includes twenty missions across 26 maps. Weapons that the player can use include disruptors, the Klingon Bat'leth, grenade launchers, and a gun which creates a miniature black hole.

Klingon Honor Guard was the first game other than Unreal itself to use the Unreal game engine. MicroProse both developed and published the game. It was released in the UK and Japan first, on February 9, 1998, with the release in the United States following on October 14.

The voice acting talent for the game included Tony Todd as Captain Kurn, Robert O'Reilly as Gowron, and Barbara March and Gwynyth Walsh as the Duras sisters Lursa and B'Etor.

Thierry Nguyen at GameSpot thought that Klingon Honor Guard suffered from the same problems as the original Unreal and replicated some of the enemies seen in that game but with different graphics, albeit in greater quantities. Whilst he thought that level design improved as the game went on, he also found that the gameplay broke down into finding objects to open locked doors in order to reach the final room which completed the level. He pointed out that multiplayer was effectively unplayable at launch, with a patch promised, and while it might be enjoyable for a Star Trek fan, it was otherwise quite average. The IGN review said that they were pleased to see that the intelligent enemies which had appeared in Unreal continued to be seen in Klingon Honor Guard, but found a variety of graphic and gameplay bugs as well as suffering from at least one computer crash per level which gave it a very rushed feeling. Overall they felt that the game seemed like it was a Klingon style overlay for Unreal and not really a brand new game.

Nick Smith for Allgame said that despite the Star Trek license, Klingon Honor Guard was a "truly excellent game in its own right". He said that the action ran as fast as Doom, while the missions were inventive. He said "Whether you're a true Trekker, a first-person shooter fan, or just an eye-candy junkie, this title will not disappoint you." In a retro review for Eurogamer in 2010, John Walker criticized the length of the game but praised the level design for the mission where the player fights enemies on the outside of a spaceship. He also reserved praise for the Ding-Pach Spin Claw, a weapon which fires off a blade which eventually returns but cannot be fired again until the blade returns. He summed it up by saying that it was a "game that is, unquestionably, fantastically overlong and dull. But a game that contains the thrill of space floating combined with the best FPS weapon ever made." Chris Chan for the Malaysian-based English language newspaper New Straits Times ranked Klingon Honor Guard as the eighth best Macintosh-based game of the 1990s.