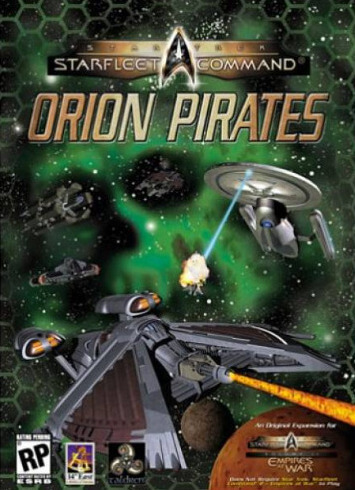 Starfleet Command: Orion Pirates does not have a set story for the main galactic powers other than a generic campaign where a player fights against the pirates. Players who elect to play as one of the newly added cartels can choose between a generic campaign or a special pirate story campaign, which features a unique story, as well as missions that touch on events that happened in Empires at War.

The game received "generally favorable reviews" according to the review aggregation website Metacritic.

Steve Butts of IGN said, "There are twelve new campaigns here along with 26 skirmish missions. Best of all there's a simple mission creator that lets you set up the engagements you'd like to see. Twelve multiplayer missions and three bonus missions based on the "A Piece of the Action" episode are included as well." Butts said the interface for ship to ship action is "well implemented enough" and "everything is laid out reasonably well", but "there are really far too many buttons on the interface for my tastes." He called the AI "robust" and said damage modeling in the game is "excellent", but said some of the ship's voice acknowledgements are bland. Butts said, "Sadly, there is no z-axis in the game" and said it detracts from the realism. He said, "the folks at Taldren...have tried to expand the promising Dynaverse II engine" but said "the system still has many of the shortcomings that plagued Empires at War." Butts noted, "Orion Pirates isn't compatible with previous versions of Starfleet Command." He said, "it seems a lot like just an expansion at first glance, but it's really more of a stand-alone mission pack with a few new features added," and that "the real meat of this game is the tactical combat model."

Giancarlo Varanini of GameSpot said the game "has an impressive amount of content for a stand-alone expansion." Varanini wrote, "Dynaverse II is a semipersistent universe where you can travel through the universe as any one of the races in the game, engage in battles with other players, and work your way up to getting new and more powerful ships," and that the game "includes a fully functional Dynaverse II mode out of the box, and it also contains new skirmishes, a new race, gameplay improvements, and basically all of the features of the original game." He said the single-player modes "are for the most part exactly the same as those in Starfleet Command Volume II, but there have been some changes made," and noted the skirmish mode with premade scenarios such as Star Trek II: The Wrath of Khan. He said, "the campaign mode still suffers from a poorly designed interface." He also wrote, "many of the early missions can be incredibly difficult" in the campaign mode, but said the game's best feature was "a working Dynaverse II", and that it adds a great deal of replay value to the game.