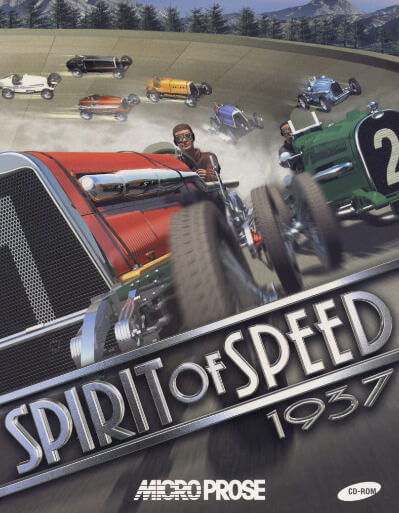 Spirit of Speed 1937 is a racing video game developed by Broadsword Interactive. The game was originally released in 1999 exclusively in Europe by Hasbro Interactive, who released the game under the MicroProse brand name. In 2000 the game was ported to the Dreamcast, and was published by Acclaim Entertainment under the LJN banner, five years after LJN was shut down by Acclaim. This version saw a North American release, and was released there on June 29, 2000. Spirit of Speed 1937 takes gamers back to the 1930s when motorsports were in their infancy and drivers raced for the thrill of speed, the danger, and the glamor that came with it. A port for the Game Boy Advance was in the works but was scrapped.

Other cars include the Bugatti 35, Bugatti 59, Duesenberg, ERA Remus - which sported a 1500cc supercharged motor that accelerated to 60 miles per hour (97 km/h) in a little under five seconds, Mercedes-Benz W125, Mercedes-Benz W154, Miller, and the 24-litre Napier-Railton that hits its top speed at a terrifying 168 miles per hour (270 km/h) despite its rather hefty weight for a one-seater. Players race around nine legendary courses located in Melhalla (Libya), AVUS (Germany), Montana (U.S.), Roosevelt Raceway (U.S.), Montlhéry (France), Pau (France), Donington (England), Brooklands (England), and Monza (Italy).

Spirit of Speed 1937's modes of play are Single Race, Championship Season, and Scenario. Single Race allows players to select a car and course to race on. Championship Season is where users take part in a series of races in an attempt to win the title. Scenario is a mode that sets up a historic racing moment for the player to experience. Each mode is broken into three separate difficulties but none of them include a two-player feature. Along with the standard controller, the game also supports arcade sticks and steering wheels.

The Dreamcast version received a polarized reception from critics. IGN's Jeremy Dunham gave the game a 2.2/10 and called it "the poorest excuse for a Dreamcast game I have ever laid eyes on.", harshly criticizing nearly every aspect of the game, including the load times, course designs, control, and graphics. GameSpot's Frank Provo criticized the sound effects and the visuals of the game. Giving the game a score of 1.9/10, the site named it the Worst Video Game of 2000 – the first year the award was given for console games. DC Swirl gave the game 3 out of 5 swirls, commending the accurate portrayal of auto racing of the period, and approving the price ($20) of which the game was retailed. HappyPuppy gave a rating of 6.5/10 and a mixed review criticizing the gameplay but complimenting the graphics. Super Juegos, however, gave a better score of 72. GF3K.com gave a far better score of 7.8 out of 10, praising the controls, sound, and the game's accuracy in portraying vintage racing cars.

The Secrets of Atlantis: The Sacred Legacy
hit
upd
new