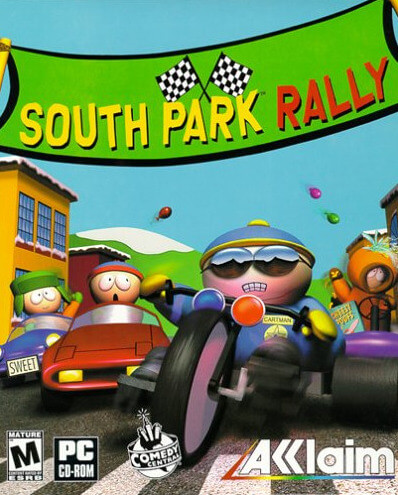 South Park Rally is a kart-style racing video game based on the American adult animated sitcom South Park. The game is developed by Tantalus Interactive and was the last to be published by Acclaim Entertainment (near the end of the third season of the show) for the PlayStation in 1999, which was later ported to Microsoft Windows in 1999 for North America and in 2000 for Europe and for Nintendo 64 and Dreamcast in 2000. The game includes many characters, vehicles, locations, items and other features inspired by or featured on the series.

Development on the title – based on Tantalus' own concept – was done on three platforms simultaneously, and took seven months. South Park Rally was the third video game based on the series, as Acclaim had also published the games South Park (1998) and South Park: Chef's Luv Shack (1999).

South Park creators Trey Parker and Matt Stone had little to do with the development of South Park Rally (as well as the two other Acclaim releases), although they did contribute a number of original lines of voice acting for it, as they do most of the voices on the show.

The Mayor of South Park has decided to stage a rally series that will take place through the heart and outskirts of the town. Favorite characters from the popular television series are included and are able to make use of destructive automobiles, including police cars, mini Porsches, Big Gay Al buggies, wheat bags, jeeps and dozens of other vehicles.

Championship: The main focus of the game, which has 14 different races (additional races in the Dreamcast version), all of which have to be done in order. This is the only mode where characters and tracks can be unlocked.

Multiplayer: A race allowing two to four players to choose any unlocked characters on any unlocked track and race.

Over time, Parker and Stone have publicly criticized Acclaim and the quality of the games as well.