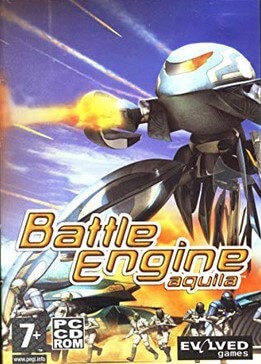 Battle Engine Aquila is a 2003 video game for Xbox and PlayStation 2 developed by Lost Toys and published by Infogrames. In the game you pilot the Battle Engine for the Forseti military in their wars against the Muspell to decide who will rule what's left of the world. Battle Engine Aquila received little attention from the public despite overall good reviews from critics. It was listed as #86 in the Top 100 Games for PlayStation 2 by IGN. A later Microsoft Windows port was published by Encore Software.

The ice caps on the planet Allium have melted due to the greenhouse effect. As a result, most of planet's surface ended up underwater. Only 13 islands scattered across the surface remain and only two civilizations of Allium's human-like inhabitants are left: The peaceful and technological Forseti and the aggressive Muspell. Both civilizations are at the brink of war with each other in a battle over the remaining landmasses.

The player assumes the role of Hawk Winter, a Forseti dockworker. He is also a dock racer where he races on his loader. After one of the races Tatiana Kiralova, a friend of Hawk's and an overseer of the Aquila program, persuades colonel Chuck Kramer, the leader of the Forseti Air Force, to secretly assign Hawk to piloting the Battle Engine.

The war starts with the Muspell attack on RI-04 island close to Forseti Major, the homeland of Forseti. Aquila program R&D facilities are located there. The player wipes out the whole Muspell strike force in time to fight the rest of the war.

There are, by the end, 4 different types of Battle Engine that one may choose to pilot: Pulsar, Blazer, Lancer and Sniper. There are multiple weapons that are available for the Battle Engines that can be used. The Sniper Battle Engine only has 1 airborne weapon (the others have two each), the Vulcan Cannon, but it is the only ship that can engage a stealth mode, rendering it invisible. This capability drains the energy of the Battle Engine, in a similar fashion to the Jet Mode.

The campaign provides at least 8 hours gameplay on the easiest difficulty, and each level presents you with a new threat or dilemma to tackle. There are a variety of boss - style unique enemies that play key roles on the battlefield, and a good variety of standard units to take on as well. The story's narrative and the characters within do little to enhance the game's entertainment value.

The battles themselves are notably well simulated, with beach landings, ambushes and airborne landing craft, artillery raining down from naval forces while bombers and fighters engage each other overhead.

The game also involves some strategic thinking, giving you the option of what targets to prioritize rather than giving you a specific objective. You may at any point choose to take out the enemies factories, distract their fighters, harass incoming landing craft or pick off specific targets.