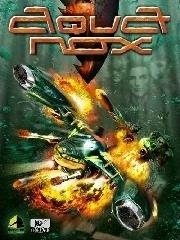 AquaNox is a series of submarine-based first-person shooter/simulation video games set in the distant future. The collection includes AquaNox, AquaNox 2: Revelation and AquaNox: The Angel's Tears. The predecessor and the starter of the series is the MS-DOS title Archimedean Dynasty.

In the middle of the 22nd century, raw materials on Earth became increasingly scarce and as the end of the resources loomed, people began to prospect for resources on the ocean floor. This resulted in the construction of mining stations beneath the Pacific, Atlantic and Indian oceans. Many countries set up these deep-sea stations where workers and engineers extracted the oceans' treasures. Nevertheless, the output was far from enough to cover an ever-increasing demand. When the natural resources on Earth's surface were depleted, a time of destruction and wars began. In the fight over the planet's last remaining resources, alliances fell apart, countries became hostile and old conflicts flared up.

With increasing cruelty and senselessness, man destroyed the very basis of life on the surface of the earth. After a series of resource wars, nuclear weapons completed the destruction that man had not yet finished with his industrial pollution. When the last glimmer of hope for humanity's survival was extinguished, people fled into the depths of the oceans.

The former extraction stations became the last refuge of those fortunate enough to be able to pay the price of entry into the underwater world. The poorest of the poor were left behind, condemned to die in a desolate world polluted by radioactivity. Life outside the oceans became impossible as the continents were flooded by rising sea levels and a harsh nuclear winter covered most of the oceans and the shrinking surface landmass of the planet with a layer of radioactive dust, snow and ice many meters thick. A 40-meter thick layer of dead organic matter, the so-called POM layer, covered the oceans. Not a single ray of sunlight penetrated the dense particulate layer that plunged the world into a darkness like none other. Nevertheless, mankind rose one last time to a new life, the only life, in a dead new world. This world was humanity's creation, and was now called Aqua. The following events take place in the middle of the 27th century.

Today, in the year 2661, mankind lives in gigantic cities underwater. Aqua is divided into political power blocs, such as the Aquatoria of the capitalistic, democratically governed Atlantic Federation, the oligarchy of the Arabic Clans Union and the monarchist Russo-Japanese Shogunate. In the South Pacific lies the Tornado Zone, stirred up by surface storms, where an anarchist pack of mercenaries, pirates, buccaneers and outlaws gathers, ever ready to sell their friends and their souls.

A single company has long ago monopolized many industries necessary for human survival underwater—EnTrOx, which stands for "Energy-Transportation-Oxygen". New technologies allow extremely fast underwater travel. However, many old technologies are lost or have become useless. For example, due to the high amounts of fallout in the atmosphere, satellite communication and global positioning are impossible, although some organizations are looking for ways to restore these abilities.

The player's task is to complete a series of story-related combat missions. During the course of the missions additional support and story elements are revealed by the secondary characters. The enemies range from hostile vessels to alien or artificial life-forms such as bionts.