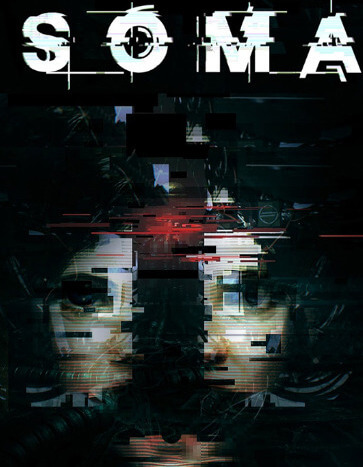 Soma takes place on an underwater remote research facility with machinery that begins to take on human characteristics. Simon Jarrett, a fish-out-of-water protagonist, finds himself at the facility under mysterious circumstances and is inadvertently forced into uncovering its past, while trying to make sense of his predicament and potential future.

Soma's gameplay builds on the conventions established in the previous horror titles of Frictional Games, including an emphasis on stealthy evasion of threats, puzzle-solving and immersion. However, in a break with this tradition, it also de-emphasizes aspects such as inventory management in favour of a tighter focus on narrative. Soma received positive reviews from critics, who applauded its story and voice acting, although its enemy design and encounters received some criticism.

Soma is a survival horror video game played from a first-person perspective. The player will encounter a number of creatures, which each embody an aspect of the game's themes. Soma primarily utilizes elements of psychological horror instead of conventional scares found in most video games within the genre. Throughout the game, the player will find a large array of clues, such as notes and audio tapes, which builds atmosphere and furthers the plot. Similar to most titles by Frictional Games, the player progresses through puzzle-solving, exploration, and the use of stealth; the player may die if they fail to avoid monsters, although two years after the initial release, a "Safe Mode" has been added that keeps the monsters but stops them from killing the player.

Soma takes place in an underwater research facility known as PATHOS-II in the year 2104. While the station itself has fallen into disrepair by the start of the game, PATHOS-II was a sophisticated research outpost located in the North Atlantic Ocean. Originally established as a thermal mining operation in the 2060s by Japanese conglomerate Haimatsu and European conglomerate Carthage Industries, the facility’s primary purpose shifted to space technology and operation of the Omega Space Gun – an electromagnetic railgun designed to launch satellites and other small equipment into orbit without the cost or risks of traditional rockets. All operations and maintenance on PATHOS-II are overseen by the Warden Unit (WAU), an artificial general intelligence integrated with all computer systems in the facility.

The crew of PATHOS-II unexpectedly became the last people to exist on Earth after a major extinction event caused by a comet striking the planet. There, the last humans survived on a day-to-day basis, attempting to fight the negative effects of their collective isolation, as well as other issues that began to pose a credible threat to their well-being.

In 2015, protagonist Simon Jarrett survives a car accident, but sustains severe brain damage and cranial bleeding. Due to his injuries, Simon agrees to undergo an experimental brain scan under the control of graduate student David Munshi. During the scan, Simon appears to black out, and regains consciousness on Site Upsilon of PATHOS-II, an apparently-abandoned submarine research center. Exploring Upsilon, Simon establishes a connection with a woman named Catherine Chun, who invites him to Site Lambda and reveals that he has awoken in the year 2104, one year after a comet devastated the Earth and left PATHOS-II as the final outpost of humanity. Along the way, Simon encounters robots that believe they are human and bypasses hostile robots and mutants.

Arriving at Site Lambda, Simon discovers that Catherine is not human, but a brain scan of a PATHOS-II employee downloaded into a storage unit. Simon himself is the result of his brain scan from 2015 being uploaded into the modified corpse of another PATHOS-II employee by an artificial intelligence named the Warden Unit (WAU), which took control of the center and turned all the surviving humans into bio-mechanical mutants to fulfill its task of preserving humanity. The sole means of anything of human origin escaping Earth is the ARK, a digital black box designed by Catherine that houses a simulated world in which the brain scans of all the PATHOS-II personnel have been preserved. Despite its completion, the ARK has not yet been sent into space. Simon agrees to aid Catherine in recovering the ARK and completing her mission.

As the ARK is kept in the Tau site at the absolute depths of the Atlantic Ocean, Simon heads toward the Theta site to retrieve a submarine named DUNBAT that can withstand the abyssal pressure. Unfortunately, the WAU has preemptively tampered with the DUNBAT, forcing Simon to move to the Omicron site to create a new body capable of traveling through the seabed. While searching for the essential components at Omicron, Simon receives mental messages from PATHOS-II's artificial intelligence specialist Johan Ross, who begs him to destroy the WAU. Upon the completion of Simon's new body, Catherine copies Simon's consciousness into it, resulting in Simon having to choose between euthanizing the Simon in his old body or leaving him to whatever fate befalls him.

Descending into the abyss, Simon retrieves the ARK from the Tau site and takes it toward the Phi site, where the Omega space cannon is located. However, he is forced to take a detour through the Alpha site, where the WAU's core is hidden. Here, Ross reveals to Simon that the structural gel with which he created his new body was designed by Ross to poison and destroy the WAU, and that his colleagues refused to use it in time. Ross gives Simon the opportunity to eliminate the WAU, while secretly planning to kill him to prevent the WAU from adapting to Simon's immunity. Before he can do so, Ross is devoured by an aquatic leviathan, from which Simon escapes by reaching the Phi site.

At the Phi site, Catherine copies Simon's and her brain scans into the ARK at the last minute before it is launched into space. When Simon is confused as to why the two remained on Earth despite their accomplishment, Catherine explains that it is their copies that inhabit the ARK and argues with him about the nature of their mission until her storage unit short-circuits from exertion, effectively killing her. Simon is left helpless and alone in the darkness of the abyss.

In a post-credits scene, the version of Simon copied to the ARK, completely unaware of the other Simon left behind on PATHOS-II, awakes and reunites with Catherine in an idyllic landscape. Meanwhile, the ARK drifts off into space and leaves the devastated Earth behind.