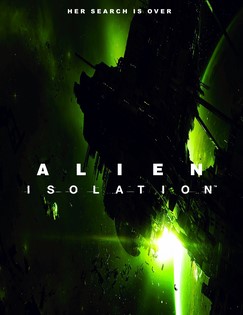 Alien: Isolation is a survival horror game developed by Creative Assembly and based on the Alien science fiction horror film series. It was published by Sega and released for Windows, PlayStation 3, PlayStation 4, Xbox 360 and Xbox One in October 2014. The game is set 15 years after the events of the 1979 Alien film and follows Amanda Ripley, daughter of Alien protagonist Ellen Ripley, as she investigates the disappearance of her mother.

Unlike previous game adaptations of the Alien franchise, Alien: Isolation places an emphasis on stealth and survival horror gameplay, requiring the player to avoid and outsmart a single alien creature with tools such as a motion tracker and flamethrower. It was designed to resemble the original Alien film rather than the more action-oriented 1986 sequel Aliens, and features a similar lo-fi, 1970s vision of what the future would look like. The game runs on an engine built from scratch to accommodate technical aspects such as atmospheric and lighting effects and the alien's behaviour. Creative Assembly intended to make Alien: Isolation a third-person game, but used first-person to create a more intense experience.

Alien: Isolation is a single-player action-adventure game with emphasis on stealth and survival horror features. The player controls Amanda Ripley from a first-person perspective, and must explore a space station and complete objectives while avoiding, outsmarting and defeating enemies. Objectives range from activating computers to collecting certain items or reaching a specific area in the game. The player can run, climb ladders, sneak into vents, crouch behind objects to break the line of sight with enemies, and peek over or lean around to gain view. The player also has the ability to go under tables or inside lockers to hide from enemies.

Amanda encounters several antagonists over the course of the game, including hostile humans and androids. These can be defeated with gunplay or other offensive means. The main antagonist, an alien creature, pursues the player throughout the game. The alien creature cannot be defeated, requiring the player to use stealth tactics in order to survive. Instead of following a predetermined path, the Alien has the ability to actively investigate disturbances and hunt the player by sight or sound. Along the way, the player can use both a flashlight and a motion tracker to detect the Alien's movements. However, using any of these increases the chance of the Alien finding the player. For example, if the Alien is moving and close enough, the tracker's sound will attract the Alien, forcing the player to use the tracker wisely and remove it as soon as it detects motion. The motion tracker cannot detect enemies when they are not moving and cannot determine if the alien creature is up in the ducts or on ground level.

Although Amanda gains access to a revolver, a shotgun, a bolt gun, and a flamethrower over the course of the game, Alien: Isolation emphasizes evasion over direct combat by providing limited ammunition. The player can also craft items by collecting schematics and different materials. Items include EMP, noisemakers, molotov cocktails, and pipe bombs; these can help the player deal with enemies. For example, the noisemaker can be used to attract enemies in a particular direction. The Alien is afraid of fire, so using flame weapons forces it to retreat into the station's ventilation system. The player has a limited amount of health which decreases when attacked by enemies; health is restored with medkits, which can be crafted with materials in Amanda's inventory.

The space station is divided into sections connected by trams and elevators. Some doors require certain actions before entry is allowed; for example, some require a keycard or entry codes, while others need to be hacked, or to be cut with welding torches. Computer terminals and rewiring stations can be used to access information, trigger actions such as disabling security cameras or manipulating the space station's air-purification mechanism. An automap helps the player navigate the different areas of the game. To save game progress, the player needs to locate a terminal in the game and insert Amanda's access card. If Amanda dies, the player must restart from the last saved point. In addition to the campaign mode, Alien: Isolation features a special mode, called Survivor Mode, in which the player must complete objectives within a time limit on different challenge maps, while avoiding an alien creature.