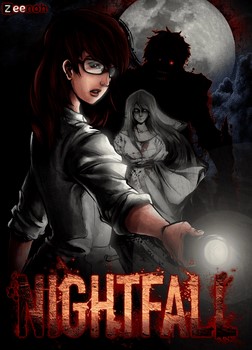 Nightfall: Escape is a first-person survival horror video game developed and published by Filipino company Zeenoh Inc. The game was created for Microsoft Windows, OS X and Linux, and was released as a full game on June 26, 2016 for the Steam platform. The player controls Ara Cruz, a field journalist who is assigned to investigate an old mansion that lead to a series of mysterious disappearances. Nightfall: Escape received mixed positive and negative reviews from critics, but it was praised for its narrative story and the uniqueness of the monsters used. Nightfall: Escape was awarded as the Most Outstanding Narrative Story by the Department of Information and Communications Technology in collaboration with the Game Developers Association of the Philippines, and the Animation Council of the Philippines held an awards night ceremony for games and animation on November 27, 2015, at SM Mall of Asia Cinema 5.

The development of Nightfall: Escape began in October 2014 as a mobile game but later upgraded into a PC game for the Steam platform soon after the announcement campaign in Kickstarter and Square Enix collective. Although after a few months, the team decided to back out of Kickstarter and open the game in early access in the Steam platform. The game has gotten "greenlit" by the Steam Greenlight service, available for download on the Steam platform ever since the Pre-Alpha PC Version on May 11, 2015, while the Beta version was released on May 30, 2016.

Nightfall: Escape is a first-person survival horror video game set in a haunted mansion homed by Philippine mythical creatures. Its presentation is similar to Silent Hill, where the protagonist gets trapped in an alternate dimension with no escape.

The player's character, Ara, is initially equipped with a flashlight, but eventually obtains a shard that would let her use a "bloodlight" to see hints and items being hidden in plain sight. This feature is very useful though there are setbacks as the characters visibility to some monsters become eminent. This feature also drains the life of the character, although her life is able to regenerate. The player is able to collect tools and weapons to use in some scenarios. The player must unlock the mystery of the haunted mansion as light shards collected in the game shows the historical events that circulates around it. Other items are hidden for the player collect to help solve various puzzles in the mansion.

The game also comes with a pause screen menu where they can view 3 different divisions which are the Inventory, Bestiary and Gallery. The inventory of the game features a grid system, which is automatically opened when the player interacts with unlockables, and puzzles. The Bestiary together with the Gallery however is featured in a Panel System. The Bestiary section is where they can see the stories or origin of the monsters they encounter throughout the game and, lastly, the Gallery is where the player is able to see the monsters' 3D models that are equivalent to collectibles or trophies.

Nightfall: Escape puts the player in the perspective of Ara Cruz, a field journalist who was given a chance to investigate the mysterious disappearances in a remote area which started to rise. She soon realise that the disappearances has something more than what they seemed. With no help from her reliable assistant Jolo, she must uncover the mystery that surrounds the abandoned mansion infested with creatures where she taught only existed in lores. Either she will uncover the story of the missing people or she might just become another number in the count.

In 1899, during the Spanish conquest in the Philippines, there lived a wealthy mestizo family, the Dela Vega. They had an only daughter named Maria, known to be enthusiastic and kind to the people around her. She became friends with the son of a family maid named Simon, who is also an errand boy and they eventually became lovers. The Americans arrived in the Philippines shortly after the Spanish conquest. Simon decided to enlist in the army to defend the country. Due to circumstances, he became a prisoner of war.

With the Spanish and American occupation ceased, he returned to his hometown and decided to look for Maria dela Vega once more. At a small gathering in the mansion he and his mother used to work in, he sneaked in and pretended to be a guest. He soon knew of her succeeding her family’s legacy and her engagement to another rich gentleman. The news filled him with rage, enough to have a heated confrontation with Maria for the first time in months. The rage lead Simon in committing a crime of passion, raping and killing Maria, as well as killing her fiancé. Filled with guilt, the man took his own life by hanging himself up a balete tree.