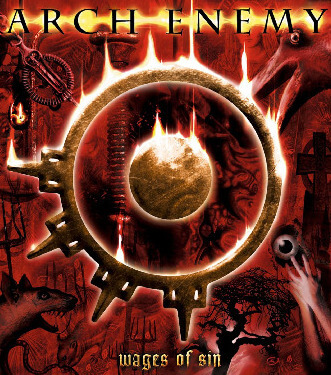 Wages of Sin is an expansion pack (a mission pack) for the computer game SiN from late 1998. Wages of Sin was released in late February 1999 by a then relatively unknown game production studio known as 2015 Games, who later became famous for their critically acclaimed game Medal of Honor: Allied Assault. The add-on begins its story after the events pictured in Sin, replacing the villain Elexis Sinclaire (who went missing due to mysterious circumstances) with Mafia boss Gianni Manero, and once again letting players enter Freeport City in John R. Blade's shoes.

While keeping the interactivity level and the real-world level design of the original game, Wages of Sin adds a few extra elements beyond the standard weapons and enemies upgrade. Wages of Sin features new enemies, locations and weapons, as well as items like the flashlight, nightvision goggles and ropes. A multiplayer game type called Hoverbike deathmatch is also included in the game.

After Elexis Sinclaire disappeared at the end of Sin, Wages of Sin continues the storyline by introducing the new villain Gianni Manero, a mob boss who seeks to gain power from the leftovers of Elexis' former company SinTEK. Manero produces new genetically engineered creatures (mutants) under secret supervision, but when some of these mutants break out and run into the city, the elite security force group HARDCORPS becomes aware of them and it's up to HARDCORPS leader John Blade, who starred as the hero and the player's character in Sin, to set things right. Blade's hunt for Manero leads him to new locations of Freeport City that were not included in the original game, features new enemies and weapons, and has such interesting story/gameplay elements as the kidnapping of a scientist's daughter and day/night scenarios of the same levels, depending on the player's choice.

Although Elexis Sinclaire never appears in Wages of Sin, there are lots of references to her (in serious and humorous ways) throughout the game and the ending leaves a big hint towards her return (which happens in Sin's official sequel, SiN Episodes).

Wages of Sin is an add-on utilizing the same technology the original game is based on. However, great attention to detail and interactivity was kept when 2015 designed Wages of Sin, resulting in even more options and visual treats than Sin could offer.clarification needed Also, the locations the player character visits greatly expand the Freeport City experience started in Sin, and because Sin moves out of Freeport at about halfway through the story, the add-on bases the whole adventure in the city and lets the player visit such locales as a cargo ship, a vacant building, a nightclub and Manero's casino and penthouse complex.

Many special effects are impressive even today,by whom? such as a spider emerging from the body of a shot mutant or the earthshaking fireball explosion of the IP36 nuclear rocket launcher.

On the audio side there is some new music, new sound effects and brand-new voice acting from the same actors who voiced Sin, plus some new voices (like Manero's) specifically for this add-on.

Game Revolution gave it a B rating, writing "As an add-on, Wages of Sin is great. Unfortunately, was Sin ever that good to begin with? I found it to get stale quickly and almost tediously repetitive as time went on, lacking both the sharpness and polish of games like Half-Life, which took the Quake 2 engine to new untold highs. Wages of Sin is still good, but it expands on that flawed base, like a rose growing from soil that was not blessed with Miracle Grow". GameSpot was also mostly positive in their review, which stated "Despite the sound problem and the other minor issues, however, Wages of Sin is a very impressive first-person shooter. If you held onto your copy of Sin and resisted the urge to return it before the patch came out, you should definitely give this mission pack a try. It's not a groundbreaking game experience, but it is a fast-paced, action-packed first-person romp that hearkens back to the classics of the genre."