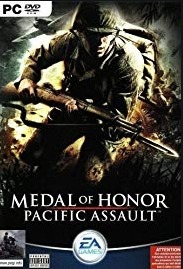 Medal of Honor: Pacific Assault is a first-person shooter video game, the story of which takes place during the Pacific War. It is the 7th installment of the Medal of Honor series.

Medal of Honor: Pacific Assault introduced some new features to the franchise, such as recovering health by calling the corpsman, and the ability to order squad members to give covering fire, regroup, move up and fall back.

In Medal of Honor: Pacific Assault, it was important for the developers to have a full story line, emphasizing Sergeant Thomas Conlin and his squad.

Medal of Honor: Pacific Assault Director's Edition features some additional content, such as a presentation that shows the real history of American-Japanese war, behind the in-game missions (levels). and a built-in music player that allows the user to listen to the soundtracks of the game.

The game begins with the player, in the role of Pvt. Thomas Conlin, a U.S. Marine in the Pacific Theater of World War II, aboard the USS Arizona during the attack on Pearl Harbor, taking part in the defense.

After that, Conlin is then reassigned to the 2nd Marine Raider Battalion joins with his old bootcamp training mate as they take part in the notorious Makin Island raid. During the raid, they are tasked with destroying a radio tower, destroying a supply dump, and rescuing a downed airman, before returning to their insertion point to fend off a Japanese counter-attack and defend their submarines from an aerial attack.

Following the Makin raid, the squad is assigned to the 1st Marine Raider Battalion and deployed in the Guadalcanal, where they are first tasked with the defence of Henderson Field and the outlying area against a Japanese attack, culminating in a push to re-take the airfield. They also take part in the Battle of Edson's Ridge and patrols of the Lunga River. As part of the Guadalcanal Mission, Conlin becomes an impromptu pilot, as he is required to take control of the SBD Dauntless.

Afterwards, Conlin is promoted to sergeant and squad leader, and takes part in the Battle of Tarawa. It took only three days to take Tarawa. Where Conlin secures the Tarawa beachhead then he neutralizes a major Japanese command center and destroys some Japanese AA guns which are used by Japanese forces to prevent American boats from coming to Tarawa atoll then he continues to clear Tarawa from the remaining forces.

The game was developed by EA Los Angeles and published by EA Games for the PC. It is primarily a first-person shooter, with the exception of one level in which the player flies an SBD Dauntless in the middle of a dog fight. The engine of the game is a modified Lithtech Jupiter created from Monolith Productions in additional with Havok physics engine. The Studio CTO/COO was Steve Anderson and the Director of Quality Assurance was John Palmieri. The music was composed by Christopher Lennertz.

Pacific Assault received a "Silver" sales award from the Entertainment and Leisure Software Publishers Association (ELSPA), indicating sales of at least 100,000 copies in the United Kingdom.

All games from the serie "Medal of Honor"

View all games "Medal of Honor"