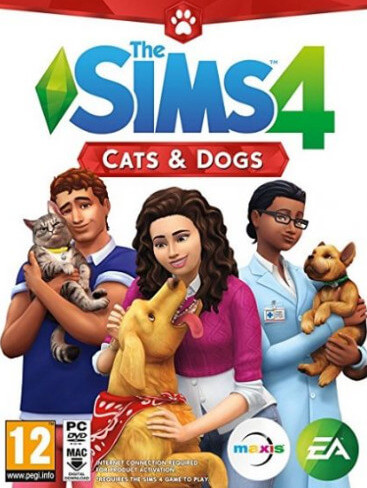 The Sims 4: Cats & Dogs (stylised as SIMS 4) is an expansion pack for The Sims 4, that was released on November 10, 2017. On July 31, 2018, The Sims 4: Cats & Dogs was released for the Xbox One and PS4. It features a new world called Brindleton Bay and adds cats and dogs into the game. It also allows players to create their own veterinary practice and to pursue a veterinary career. It takes elements from The Sims Unleashed, The Sims 2: Pets and The Sims 3: Pets.

Electronic Arts announced at Gamescom 2017 that players would be able to create cats and dogs with The Sims 4: Cats & Dogs.

For the first time in the companies' history, Electronic Arts have partnered with Society for the Prevention of Cruelty to Animals to host challenges for simmers. EA and Maxis both vouched to donate 20,000 dollars to SPCA to prevent further animal cruelty and abuse. The challenges lasted from November 13 to December 10, 2017.

The game has a new "Create-a-Pet" tool.

New Aspiration: Friend of the Animals

On the aggregator site Metacritic, The Sims 4: Cats & Dogs received a score of 80 based on 9 reviews, indicating "generally favorable reviews".

The Sims 4: Cats & Dogs received a score of 82.50% from the website GameRankings based on 4 reviews. Hardcore Gamer's Spencer Rutledge called The Sims 4: Cats & Dogs "an excellent — and much-needed" expansion for the game. Twinfinite's Yamilia Avendano praised the new world but said the Vet Clinic "can get too easy and dull".