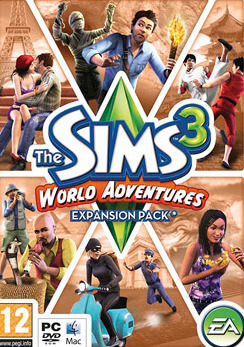 The Sims 3: World Adventures or World Adventures is the first expansion pack for the strategic life simulation computer game The Sims 3. It was announced on The Sims 3 website in August 2009, and had a North American release on November 18, 2009.

The expansion pack focuses on travelling to various areas in a manner similar to previous expansions The Sims: Vacation and The Sims 2: Bon Voyage. Sims are able to travel to simplified versions of France, China, and Egypt. At these locations, sims are able to participate in adventures to earn rewards and benefits. Sims are also able to level up in new skills: photography, martial arts, and nectar making. In addition, the expansion pack provides new objects, socials, wishes, and opportunities.

Players create their sims and control them throughout their lives. Players are able to manage various aspects of a sim's life including careers, skills and relationships. The gameplay of World Adventures remains largely unchanged from the original.

World Adventures expands on The Sims 3 by allowing players to take sims to simulated locations of Egypt, France and China. Sims are able to engage in cultural activities depending on the location. In Egypt, sims can visit pyramids and take up snake-charming; in China, sims are able to launch fireworks as well as take up martial arts, and in France, sims can engage in nectar making. The amount of time a sim is able to stay in a location is dependent on a visa level. This level is increased by going on various adventures.

The main gameplay of World Adventures revolves around the ability to go on various quests known as adventures. An adventure consists of various goals linked together in a story line. Typical goals include exploring various tombs, finding valuables and socializing with other sims. When exploring tombs, sims must navigate various obstacles to unlock different rooms. Initially, the entire tomb is hidden in a fog-of-war that disappears as the sim enters each room. Tombs hold several puzzle solving elements such as traps, dive holes and floor switches.

In addition, the expansion pack includes a complex tomb-building element that can be accessed using the game's debug tools. Players are able to add gameplay-specific objects to their tombs as well as set various cause-effect mechanisms.

World Adventures adds three skills that provide new goals and challenges to players. The martial arts skill is initially increased by practising with training dummies. Once a skill threshold is reached sims can break wood and other objects placed over two blocks. Sims are able to engage in tournaments to increase their ranking. A sims skill level is represented visually by various belts that a sim wears on their uniform.

The photography skill is based on taking photographs with a hand-held camera. Photos are taken using a first-person viewpoint. The game can detect the subject of a photograph. The game provides goals to the player in the form of lists of subjects for the sim to photograph. In addition, players can choose various styles such as panorama and sepia.

The creature that features on the game's cover art is a mummy, which have several abilities, such as not having to go to sleep. They may also be encountered in tombs, where the player can be cursed.

There is also a new basement tool, which can be used to make proper basements without having to go through all sorts of fiddly ground operations. These basements can have four levels underground, in addition to the five above.

Early reception for this expansion pack was largely positive. GamePro argued the expansion pack's only bad feature was being able to make players lose several hours in the addictive gameplay. IGN's Steve Butts criticized the adventure-based gameplay and the difficulty of having family vacations, however, he concluded, "I hope World Adventures sets the pattern for future Sims expansions."

World Adventures was listed as seventh in a list of the top ten selling PC games (expansion pack) of 2009, according to NPD sales charts. The Sims 3 was listed as the highest selling game of 2009.