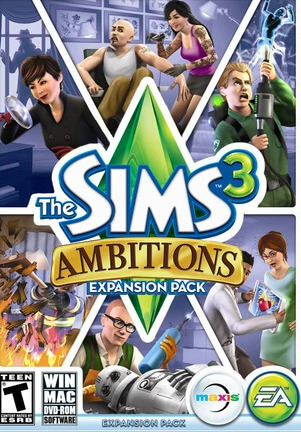 
The Sims 3: Ambitions is the second expansion pack for the strategic life simulation computer game The Sims 3. It was released in June 2010. The Sims 3: Ambitions introduces new career opportunities and control mechanisms into gameplay. Manipulation of Sims' career progressions, actions and interactions during their working are feasible. Additional career pathways introduce a diversity of skill sets available for acquisition. These features, which were absent in The Sims 3, give players greater control of their Sims' career pathways, choices and lives.

The Sims 3: Ambitions is a career-based expansion pack and introduces new career pathways, changing the style of gameplay involved in the game. In the non-Ambitions version of The Sims 3, all careers were known as "RabbitHoles", a reference to Alice in Wonderland and her disappearing in a rabbit hole. All careers would have a specific building (Political : City Hall; Law Enforcement : Police Station; Medical : Hospital; etc.). However, with Ambitions, the new careers have hands-on gameplay, meaning that the player can control what your sims do in their careers, with two exceptions.

Such examples of career pathways include firefighting, investigator and stylist. Fulfillment of duties and tasks associated with careers are committed by the players. Firefighters maintain equipment, extinguish home fires, rescue Sims from burning houses. Investigators solve cases and mysteries by convincing or bribing Sims for information, breaking into homes for clues or stealing items for evidence. Stylists are hired by neighbors to offer fashion advice and provide makeovers. The success or failure of task and duty outcomes is controlled by the players.

Implementation of the Skill Careers features increase career opportunities and enables for self-employment. Self-employed Sims utilize their existing skills to create products, such as paintings, home grown produce or literature works, and profit from their works.

Tattooing and stylist careers enable players to modify other Sims. The complexity of the tattoo system allows for players to produce unique designs by selecting tattoo shapes, colors and layers, and stylists design outfits and hairstyles. These examples bridge Create-a-Sim Mode and Live Mode, meaning real-time modification of Sims is practical for the first time in the Sims series. There are 6 possible ways a Sim may die: starvation, drowning, fire, electrocution, old age, or Mummy's Curse. A seventh possible death scenario has been added with Ambitions, Meteor Death. A meteor can strike at any time. If you have Seasons and Ambitions, you can make an alien summon a meteor. If your Sim is under the shadow of the meteor, it will fall on your Sim and kill him/her.

Twinbrook is a neighborhood which came out with Ambitions. It is most likely named after the two twin rivers that flow on either side of the richer part of the town, near the NPC (Non Player Character) households such as the Wheloffs.

Twinbrook stresses the new career/professions and skills introduced in Ambitions, such as the Stylist profession or Inventing skill. The neighborhood is situated on a bayou, with many bridges and may be in the state of Simisouri (according to NPC sim's bios). Much of the town is designed in a French style like many bayou towns. For example, the town library is a classic French design with two porticos, one at both entrances.

Scott Evans, General Manager of The Sims studio said, "The variety of careers to choose from is unmatched and we've never given players the opportunity to follow their Sims to work and affect their actions on the job. The Sims 3 Ambitions changes that. Players' actions at work now directly affect their lives, community and neighbors and become an extremely important part of how the game is played."

Associate Producer Grant Rodiek explained that career-based gameplay was something that the team had always wanted to do. "We always strive to do something new that hasn't been seen in The Sims before." Rodiek explained the main focus of an expansion pack relied on three elements: community feedback, what the development team wants to do and software limitations.

In addition, versions for mobile devices were released as standalone games.

Anthony Gallegos of IGN have said that "it doesn't reinvent the series but it's much more substantial than many other Sims expansions". GameSpot's Kevin VanOrd on the other hand, called it "a thoughtful and delightful expansion, that is full of wit and character". Dan Stapleton of PC Gamer gave the game an 85 out of 100, praising its new additions and careers. Tracy Erickson of Pocket Gamer have reviewed the iPhone version of the game, giving it 7 out of 10 and praising the customization system, addition of babies and easiness when it comes to cooking.