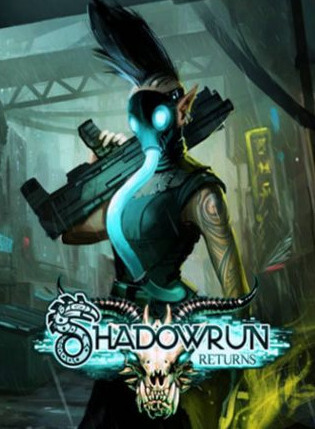 Shadowrun Returns is a science fantasy turn based tactical role-playing game developed and published by Harebrained Schemes. It takes place in the setting of the Shadowrun tabletop role-playing game. The game was successfully crowd funded through Kickstarter, and was released for Microsoft Windows, OS X, Linux, iOS, and Android in 2013.

An expansion pack titled, Shadowrun: Dragonfall, was released in 2014. It was later converted to a standalone release and as Shadowrun: Dragonfall – Director's Cut. In 2015, Harebrained Schemes launched another Kickstarter campaign to partially fund their next game, Shadowrun: Hong Kong. Similar to the Dragonfall – Director's Cut edition, Hong Kong was released in 2015 as a standalone release built using an upgraded version of the Shadowrun Returns engine.

The player is able to customize their character's gender and appearance. There are five races to choose from: humans, elves, dwarves, orcs, and trolls. The player can choose to play as one of six classes, Street Samurai, Mage, Decker, Shaman, Rigger, or Physical Adept, or the player can choose to play as no class at all. Street Samurai focus on combat and weapons, Mages use various spells including attack spells, healing spells and others, Deckers focus on hacking into computer systems, Shamans can summon spirits to aid in battle, Riggers control robotic drones that can specialize in combat or healing, while Physical Adepts use their magic spells to make themselves stronger in various ways.

The player can also interact with the environment in some ways. For instance, pushing aside objects or hacking terminals to find hidden rooms, gaining access to new routes to their main objective or finding items to use or sell. Mages are also able to see magical ley lines, which enhance their abilities while standing over them, while Shamans can see points that allow them to summon spirits.

Finally, Deckers are able to "Jack In" to the Matrix at specific points. This results in them entering a different, virtual world while still controlling the characters in the real world. In the Matrix, their stats are determined by the cyberdeck they have equipped and their abilities by the programs they have installed. In the matrix, they can fight ICs and enemy deckers while trying to gather data and hack devices, such as elevators or auto turrets.

Combat is turn based, with the player controlling the actions of their team followed by the enemies taking their actions. All characters can move based on their Action Points (AP). Characters start with a base of 2 AP per turn (3 after a certain point in the story) but can gain or lose AP based on abilities, spells or items used on them. AP is used on such actions as moving, firing a weapon, reloading, or using a spell or item.

Each character carries up to three weapons and can switch between them at no AP cost. Weapons are divided into ranged combat (pistols, sub-machine guns, shotguns, and rifles) and close combat types. Weapons also have different attacks, depending on the weapon itself and the character's skill with said weapon. Ammunition is unlimited but ranged weapons need to be reloaded when their magazines are emptied. Riggers can equip drones the same way as weapons, taking manual control of them during combat. While this gives the Rigger less AP, the drones are capable of attacking enemies or healing allies.

Those with Shaman abilities can summon additional allied spirits to the field, either through items they carry with them or special points where spirits linger. Each turn, these spirits are given a certain number of AP chosen by the player. The longer the spirit has been summoned for and the more AP it is given, the greater chance it will escape the Shaman's control, at which point it will either begin attacking anyone at random or simply flee.