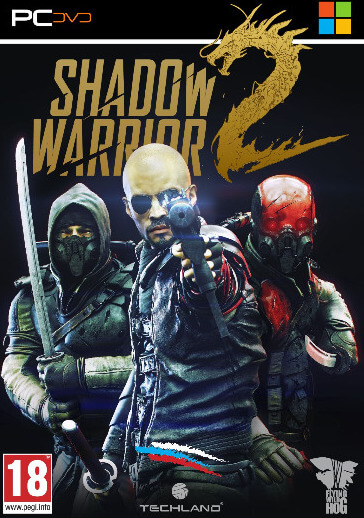 Shadow Warrior 2 is a first-person shooter video game developed by Flying Wild Hog and published by Devolver Digital. It is the sequel to the 2013 Shadow Warrior, the reboot of the 1997 original. The game was released for Microsoft Windows in October 2016, and for PlayStation 4, Xbox One in May 2017 and Xbox Game Pass in December 2018.

Shadow Warrior 2 can be played in single-player mode or in a new 4-player co-op mode. In co-op mode, each player experiences the narrative as Lo Wang but sees other players as different anonymous ninjas.

The level environments are more open and non-linear than in the previous title. New traversal mechanics have been added such as climbing walls and double jumping to allow for more exploration. Mission structure in Shadow Warrior 2 is less restricted than its predecessor, players can now revisit earlier missions to re-engage past enemies in order to upgrade Wang's skills. The game features a hub area where the player can acquire quests and upgrade their abilities before beginning a mission. Every mission, except for story-specific events, features randomly generated level design and content, including randomized map layouts, enemy positions, terrain, buildings, and weather conditions. The game utilises a procedural damage system that allows players to cut and blow off enemy limbs and body parts.

The game features over 70 different weapons, varying between firearms and blades. Killing enemies will level up weapons and reward the player with gems to augment their equipment with element properties and buffs.

Lo Wang gets a task from Yakuza to retrieve an ancient trinket from the Temple of Longing. Wang accepts the task and travels to the temple where he retrieves the artifact. After speaking to Mamushi, the second in command of Yakuza, he gets a new task to rescue Kamiko, Yakuza's leader's daughter from Zilla's labs. He finds Kamiko tied to a table with the Kyokagami Twins inside the room and Zilla watching her through a monitor. The Twins inject Kamiko with compound 61 and she begins to hallucinate. Wang then reveals his presence and the Twins run off to catch him, while huge forces of ZillaCorps soldiers attack. Eventually, Wang reaches Kamiko and brings her to Smith. Smith decides to transfer Kamiko's soul into Wang's body until he figures how to heal her body. Lo Wang then retrieves the ingredients needed to make the cure for Smith.

In the meantime, Mamushi Helka tasks Lo Wang with finding the source of black ooze that is spreading in the wildlands. She gives Wang the coordinates to the location of the supposed source.The source for the black ooze turns out to be the Outer Gates with Mezu's armor holding them locked. Wang finds Mezu still guarding the gates as before. Wang is then contacted by Master Smith asking him to go back to the mountain as ZillaCorps have attacked it.

Lo Wang is transported to wildlands and tries to reach Dragon Mountain, encountering huge forces of ZillaCorps. When Wang reaches Smith, who was gravely injured during battle, he reveals that he has finished the cure. In his dying moments, Smith puts his soul in a Soul Well. As Wang goes to administer the cure to Kamiko's body, the body attacks him, now in a horribly mutated form. After a tough fight, the corrupted body escapes. Suddenly, Ameonna contacts him and urges Wang to meet her in Shadow Hills. He meets Gozu guarding the entrance to the temple, who lets him in. When Wang meets Ameonna, he asks her to reverse the soul binding, but first he must retrieve Kamiko's body and return it to its original form.

In order to perform the soul joining ritual Ameonna needs Ancestral Chi, that can be found in a weapon that belonged to Kamiko's father. Kamiko reveals that Mamushi Helka carries around a wakizashi given to him by her father. With this information, Wang seeks out Mamushi. After a brief talk, Mamushi takes her own life and Wang brings the ceremonial dagger to Ameonna.

Gozu informs Lo Wang that they have located Kamiko's body and marks the last known whereabouts. Wang travels to the top of Devil Mountain, where the body has been feeding on Black Rain and has mutated even more. After a tough fight, the body tries to escape, but is captured by ZillaCorps. Wang then returns to Gozu to inform him about the situation.

Ameonna reveals that Kamiko's father should be in the vicinity of Outer Gates. Lo Wang travels there and finds Mezu. Mezu reveals himself to be the Oyabun, leader of the Yakuza and father of Kamiko. He then travels to Mamushi's former office, while Wang returns to Ameonna. Ameonna reveals to have known about Oyabun's identity and was setting everything up so Kamiko would die. She then orders Gozu to kill Wang, but the former evades the attack and must then fight Acolytes. During the fight Gozu and Ameonna escape. He returns to Dragon Mountain and speaks with Mezu. Mezu says that he wanted to use Kamiko to seal back the Outer Gates and Wang reveals that her soul is inside his body. They together form a temporary alliance.