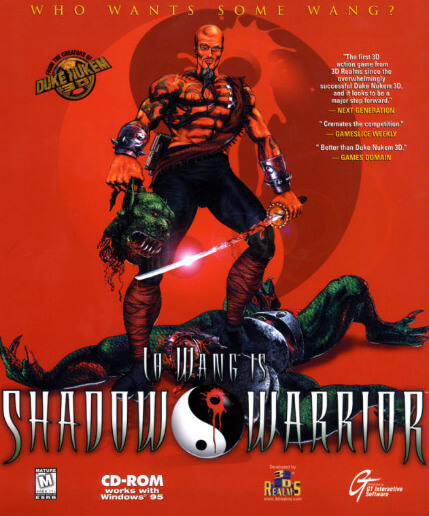 The game's improvements included introduction of true room-over-room situations, the use of 3D voxels instead of 2D sprites for weapons and usable inventory items, transparent water, climbable ladders, and assorted vehicles to drive (some armed with weapons). Although violent, the game had its own sense of humor and contained some sexual themes. A combination of Shadow Warrior and Duke Nukem 3D: Atomic Edition was published by GT Interactive Software in March 1998, titled East Meets West.

In 2005, 3D Realms released the source code for Shadow Warrior (including compiled Build engine object code) under the GPL, which resulted in the first source port a day later on April 2, 2005. In 2013, Devolver Digital announced the game would be free to obtain for a limited time on Steam. Later, Devolver Digital announced that they would permanently offer the game for free.

A remake, also titled Shadow Warrior, was developed by Flying Wild Hog and published by Devolver Digital, launched on September 26, 2013.

Lo Wang is a bodyguard for Zilla Enterprises, which has control over every major industry in Japan. However, this has led to corruption. Master Zilla, the president of the Zilla Enterprise, is planning to conquer Japan using creatures from the "dark side". When he discovers this, Lo Wang quits his job as a bodyguard. Master Zilla realizes the threat that Lo Wang poses and sends his creatures to battle him.

Later on in the game, Lo finds that Zilla's minions have killed his old mentor, Master Liep. Following his master's dying words, Lo must avenge his death. The game ends with Lo Wang defeating Master Zilla, who commands a samurai-like war-mech. However, Zilla is able to escape Lo Wang, promising a future encounter.

Shadow Warrior is a first-person shooter similar to Duke Nukem 3D and using the same Build engine. Players navigate the protagonist, Lo Wang, through three-dimensional environments or "levels". Throughout levels are enemies that attack Lo Wang, which can be killed by the player using weapons such as a katana. Shadow Warrior also features puzzles that must be solved to progress in various levels.

Lo Wang's arsenal of weaponry includes Japanese-themed weapons such as shurikens—which were "likely to be dropped in favor of  high tech fun weapon" in development—and a katana, and marked the first appearance of a sticky bomb in an FPS, an idea popularized later by Halo. It also includes guns such as Uzis, a riot gun that fires shotgun shells, and the Eraser-inspired railgun (Lo Wang frequently says "Time to get erased! Ha ha!" when picking up this weapon). In addition, the head and heart of certain enemies can be used as weapons.

Shadow Warrior was an ambitious game, containing many features not seen until later first-person shooter games. For example, the game features turrets and various vehicles (such as tanks) that the player can drive around freely in, climbable ladders, and multiple firing modes for various weapons.

Development of Shadow Warrior began in early 1994 as Shadow Warrior 3D, and preliminary screenshots were released with Hocus Pocus in May 1994. Jim Norwood came up with the game idea, George Broussard designed the character Lo Wang and Michael Wallin did some concept sketches.

Reviews from critics are mixed and ratings vary from average to positive. User reviews are generally positive. Review aggregate platforms Metacritic, and digital retail platform GOG.com indicate favorable review scores from users. Thierry Nguyen of Computer Gaming World commented: "Shadow Warrior is an average action game. While there are some good enhancements to the BUILD engine and some good level design and enemy AI, the rest of the game is mediocre." Tim Soete of GameSpot says "in the end however, Shadow Warrior's only merits are its gameplay." GamingOnLinux reviewer Hamish Paul Wilson decided in a later retrospective that Shadow Warrior was the weakest of the three major Build engine games, stating that its gunplay was the "least balanced and its levels the most likely to descend into tedium or frustration".

3D Realms released the source code of the Shadow Warrior engine on April 1, 2005 under the GNU General Public License. Due to the timing of the source code release, some users initially believed that it was an April Fools joke. The first source port, JFShadowWarrior, was created by Jonathon Fowler and released a day later on April 2, 2005, including Linux support and improvements from his JFDuke3D source port. As of January 2015, there have been no new versions of JFShadowWarrior since October 9, 2005. Shadow Warrior for iOS was released on December 19, 2012 by 3D Realms and indie developer General Arcade.

The official website was created by Jeffrey D. Erb and Mark Farish of Intersphere Communications Ltd.

Two original novels featuring Lo Wang were published. For Dead Eyes Only was written by Dean Wesley Smith and You Only Die Twice by Ryan Hughes. The titles of the novels parody titles in the James Bond book series by Ian Fleming.