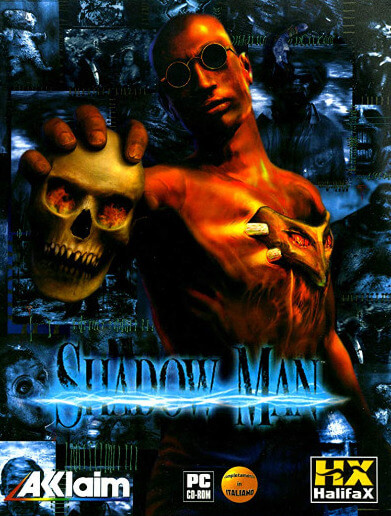 Shadow Man is an action-adventure game developed by Acclaim Studios Teesside and published by Acclaim Entertainment. It is based on the Shadowman comic book series published by Valiant Comics. The game was released in 1999 for the Nintendo 64, Microsoft Windows, PlayStation and Dreamcast. A sequel, Shadow Man: 2econd Coming, was released for the PlayStation 2 in 2002.

In 1888, Jack the Ripper – lamenting the fact that his ritualistic murders have not unlocked a mystical power that he believes to exist – prepares to take his own life. A man named Legion appears and tells Jack that the power he seeks does exist and offers to share this power with him if Jack constructs an insane asylum for like-minded killers in Deadside – the land of the dead. Proclaiming "for we are many!", Jack takes his own life.

In the present day, Michael LeRoi becomes the current Shadow Man – a lineage of voodoo warriors who protect the world of the living (known as Liveside) from threats crossing over from Deadside – after the voodoo priestess Mama Nettie bonds the Mask of Shadows to him. Soon afterwards, Nettie has a prophetic dream that Legion is preparing to usher in the Apocalypse by claiming the Dark Souls – the immortal souls of damned warriors – and using them to create an immortal army and send it into Liveside. Nettie also reveals that Michael cannot stop the Five – a group of serial killers recruited by Legion – without his powers and that the Five – who each have a Dark Soul within them – are hiding in Liveside, where Michael's powers do not work during the day. Michael then travels to Deadside with the use of his dead brother's teddy bear, which serves as a link between both worlds.

After collecting all of the Dark Souls in Deadside and passing trials set by the gods of Deadside, Michael assembles a magic knife called the Eclipser. Returning to Liveside, Nettie uses the Eclipser to trigger an eclipse, which enables Michael to become the Shadow Man in Liveside. The ritual drains Nettie of her powers and causes her to go into a deep sleep.

Michael then returns to Deadside and finds the Asylum as well as the Dark Engine which powers it. Michael finds his long-dead brother Luke within the Dark Engine along with several paths to Liveside which lead to the hiding places of the Five. Michael defeats the Five and claims each of their souls in the process. During this time, Michael finds Jack the Ripper's diary, which contains instructions on how to shut down the Engine. Michael returns to Darkside and shuts down the Engine, giving Luke his teddy bear back. Luke then reveals himself to be Legion in disguise.

Legion reveals that he sent Nettie the dream so that Michael would be forced to collect all of the Dark Souls and confront Legion, enabling Legion to claim all of the souls at once and use them to power the Engine, creating his army and sending it into Liveside. After an intense battle, Michael gives Legion all of the souls, whose combined power overwhelms Legion and kills him, destroying the Asylum as well. However, Michael is now stranded in Deadside but embraces his position as lord of Deadside.

Doug Trueman reviewed the Nintendo 64 version of the game for Next Generation, rating it two stars out of five, and stated that "Sadly, this is just a well-intentioned misfire."