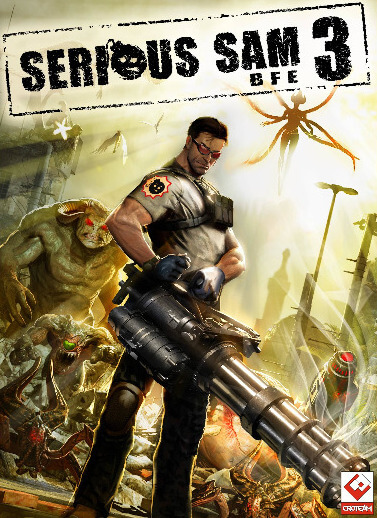 Serious Sam 3: BFE is a first-person shooter video game developed by Croatia-based indie development studio Croteam and published by Devolver Digital. It is part of the Serious Sam series and the prequel to Serious Sam: The First Encounter. The game takes place in 22nd-century Egypt, during Mental's invasion on Earth, as implied in The First Encounter. The game features a 16-player online, as well as 4-player splitscreen co-op campaign mode. The game was first released for Microsoft Windows on 22 November 2011. The OS X support for the game followed shortly after and was released on 23 April 2012. The Linux version of the game started being worked on after a high number of requests, where the first Linux-related update was the porting of the game's dedicated server. The game itself, however, was released one day after Valve opened the beta branch for "Steam for Linux", namely 20 December 2012.

Like previous titles in the series, Serious Sam 3: BFE involves fighting against many hordes of enemies in wide-open environments. However Serious Sam 3 has more closed environments than its predecessors, particularly in the early levels. There are also a larger number of enemies that can attack the player from a distance.

The player can carry an unlimited number of weapons, including a minigun, rocket launcher, assault rifle and a cannon. There are 13 weapons in total, five of which have a manual reload. The signature close-combat weapons from the first game, the knife and chainsaw, have been replaced with a sledgehammer with three modes of attack (vertical strike, 180 turn and full 360 turn).

There is no regenerating health, instead there are health and armor power-ups scattered throughout the levels that the player must pick up. Additionally, the levels are full of secret areas, where health, armor, ammo and in some cases, weapons from later levels can be found, following the tradition of the previous games. Some weapons such as the Lasergun and the Sniper Rifle and their respective ammunition pickups are in fact secret-only, and otherwise are not found in the levels normally. There are no puzzles, however the player must find keys, pull levers and find environmental anomalies to progress.

Classic enemies such as the Beheaded Kamikaze, Beheaded Rocketeer and Kleer Skeleton return in the game. New ones include the Khnum and Scrapjack (resembling the Hell Knight and Mancubus from Doom, respectively), as well as the cloned soldiers reminiscent of the Strogg from the Quake series. The Kamikaze has returned to his original design, rather than the Serious Sam II design. The Gnaar's design has radically been changed from the original game. It is now much larger, differently shaped and walks on all fours, unlike its bipedal counterpart in Serious Sam.

Serious Sam 3 features some new gameplay mechanics such as sprinting and iron sights. Unlike most other FPS games that have sprinting, you are able to sprint as much as you want, but cannot attack while sprinting. The pistol and assault rifle have the ability to aim down sights, which increases accuracy but only slightly. The player moves slower while aiming down the sight, making it impractical at close range. The player can perform hand kills or kick enemies to conserve ammo, depending on the weapon selected. For example, a Gnaar's eyeball can be ripped out or an Antaresian Spider's shell can be broken.

Serious Sam 3: BFE serves as a prequel to the original Serious Sam: The First Encounter and depicts the events on Earth before Sam's journey into the past. Prior to AD 2060, humanity had slowly begun uncovering artifacts and ruins left behind in ancient times by the Sirians, the famous and long-thought extinct race from the place of Sirius. Unfortunately, Mental has chosen this time to turn his attention upon Earth. He dispatches his space fleet carrying his endless hordes to attack Earth, leading a three-year conquest that has humanity driven almost to the point of extinction. In a last-ditch effort, the survivors turn to the Time-Lock, a recently excavated device supposedly capable of granting a single person the ability of time travel via an inter-dimensional portal. Through it, that person could reach a pivotal point in time and alter events of the past. But as the device lies dormant, they must first discover a means to turn it on.

Sam "Serious" Stone, part of the Earth Defense force, is dispatched with a detachment of soldiers in Alpha team to modern Egypt, which is occupied by Mental's alien army. Their original mission is to recon, rendezvous and extract Bravo team who are protecting Dr Stein, a scientist carrying hieroglyphics believed to contain instructions for powering up the Time-Lock. Sam's insertion goes haywire as his chopper is shot down and both teams are quickly wiped out. However, he is able to recover the hieroglyphics from Stein's phone in the museum and transmit them to headquarters. Deciphering indicates there is a hidden Sirian chamber below the Great Pyramid. Sam clears himself a path to a tunnel underneath the Sphinx and descends into the Pyramid. He not only discovers the hidden chamber, but recovers crucial information and a bracelet device from the remains of what might have been Earth's last Sirian.

In order to power the Time-Lock, two dormant but incredibly powerful plasma-energy generators need to be activated. Hellfire from Charlie team inserts Sam to bring both online. This is slowly accomplished and Team Charlie is staged to enter the Time-Lock. Sam is relieved of duty and in the process of being extracted from Cairo, but is shot down once again and is forced to flee towards the lost ruins of Nubia. Traversing through more tombs, Sam gets back in touch with Hellfire and learns that Mental's forces have overrun the human military and killed them all shortly before dying herself. Now determined to finish what the Sirians has started, Sam vows to use the Time-Lock himself and kill Mental in the past before he can destroy humanity in the present. Sam then makes one last travel to Hatshepsut Temple, where the Time-Lock is located. The struggle to this destination ends with Sam killing Ugh-Zan IV, the father of Ugh-Zan III from Serious Sam: The First Encounter. With Ugh-Zan IV dead, the Time-Lock then activates, displaying an inter-dimensional portal to 3000 B.C., the timeline where the Sirians became extinct. Sam calls Mental on Stein's phone and is answered by Mental's daughter, Judy. She tells him that Mental is planning to "moon" him. Sam notices the Moon plummeting rapidly within Earth's atmosphere and escapes through the Time-Lock to 3000 B.C. as the Moon impacts Earth, destroying the planet.