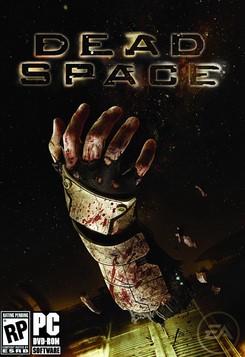 
Dead Space is a science fiction survival horror video game developed by EA Redwood Shores (subsequently known as Visceral Games) for Microsoft Windows, PlayStation 3, and Xbox 360. The game was released in October 2008. The game puts the player in control of an engineer named Isaac Clarke who fights Necromorphs, monstrous reanimated human corpses, aboard an interstellar mining ship, the USG Ishimura.

The game was met with widespread critical acclaim, being cited as one of the greatest video games of all time, and has sold over 2 million copies. Sequels Dead Space 2 and Dead Space 3 were released on January 25, 2011, and February 5, 2013, respectively.

The player controls Isaac Clarke, a ship systems engineer who must fight his way through a mining starship infested with an alien scourge. The crew has been slaughtered, and their corpses reanimated into creatures known as "Necromorphs". Various types of Necromorphs appear throughout the game, each with different abilities and requiring different tactics to defeat. The game is played from an over-the-shoulder third-person perspective.

Dead Space does not use a traditional heads-up display; instead, all information is relayed to the player via holographic projections from Isaac's Resource Integration Gear (RIG) spacesuit and the weapons themselves. For example, a small holographic display is mounted on Isaac's weapons to indicate ammunition count while aiming; also, the health meter is integrated into his suit spine and the spines of suits worn by other game characters. The player can check the current objectives and the 3D map via floating holograms projected in front of Isaac, or access the inventory screen to manage items or choose guns. However, the game still progresses in real-time during these activities, so the player remains in danger of being attacked while browsing through menus and the map.

Combat involves a mechanism called "strategic dismemberment", in which the player must cut off limbs or sections of the individual Necromorphs to defeat them. For example, shooting most Necromorphs in the head will have little effect and will only disorient them, however they can be stopped once the player removes its arms and legs. Depending on how they are wounded, Necromorphs can adopt new stances and tactics, such as sprouting new limbs or giving birth to new enemies in the process.

In keeping with Isaac's profession as an engineer, the weapons in Dead Space are mostly improvised from mining tools, such as a plasma cutter (for horizontal and vertical slicing), rotary saw, a hydrazine torch (repurposed as a flamethrower), a high-energy demolition beam, and a cannon that emits powerful shock waves. A military-grade automatic rifle is available, and Isaac can also attack enemies by clubbing them with his weapon or stomping on them. All weapons feature a secondary-fire mode; for example, the plasma cutter can be rotated 90 degrees for more effective dismemberment of vertical limbs (such as legs on a normal bipedal humanoid). The player must scavenge for ammunition and items, which are found throughout the ship or dropped by Necromorphs when killed. Automated stores throughout the ship can be accessed to buy and sell items or store them for later use. The player can use workbenches to upgrade Isaac's suit and weapons.

Other than weapons, Isaac is equipped with other tools to help him survive, solve puzzles, and combat enemies more effectively. Isaac's Stasis ability can be used to slow down enemies and objects temporarily, and a Kinesis module allows Isaac to move and throw items- sufficiently heavy or sharp objects can become improvised projectile weapons. Dead Space features zero gravity environments, through which Isaac can navigate using magnetic boots. Isaac's suit will protect him from the direct effects of vacuum or toxic environments, but it has a limited air supply and he will eventually suffocate, so the player is forced to proceed quickly when in these situations.

The story is set in the year 2508, and begins when the USG Ishimura (石村, "Stone Village"), a "planet-cracker" starship, designed to extract ore in large masses of billions of tons, sends out a distress signal to the Concordance Extraction Corporation (CEC) during a mining operation on the planet Aegis VII. The CEC dispatches the USG Kellion to investigate. After a guidance system malfunction crashes the Kellion into the Ishimura dock, the crew tries to seek other means of transport. As they explore what appears to be an abandoned ship, they are attacked by grotesque monsters, killing off all but ship systems engineer Isaac Clarke, Commander Zach Hammond, and computer specialist Kendra Daniels. Hammond notices that many of the ship's systems are failing; he and Daniels direct and assist Isaac in fixing them to keep them alive for rescue.

As Isaac moves about making the necessary repairs, he discovers various text and audio logs scattered throughout the ship, piecing together the events that transpired prior to their arrival: during the course of its illegal mining of Aegis VII, the Ishimura crew found the Red Marker, the most valuable relic of Unitology, an influential and powerful religion. Captain Mathius, a devout Unitologist, shifted focus from mining to retrieving the Marker, after being asked by the Church of Unitology to do so. Soon after the Marker's extraction to the Ishimura, humans from the planet's colony and the ship suffered from mass hysteria and violent hallucinations, before subsequently killing each other. Mathius cut off traffic and communications between the two sides, later going insane. Chief Science Officer Terrance Kyne tried to relieve Mathius of duty, only to accidentally kill the captain in a struggle. An alien virus, the genetic coding of which is encrypted on the Marker, began ravaging the Aegis VII colony, infecting any available corpses and turning them into "Necromorphs" – mutated and reanimated corpses that violently slaughter uninfected humans to spread the infestation. A colony shuttle carrying an infectious Necromorph caused the scourge to spread across the Ishimura. Though Hammond states that he is unaware of what the Marker is, Daniels confides to Isaac that Hammond may be lying. Isaac later encounters his girlfriend, Nicole Brennan, a medical officer aboard the Ishimura, though they are unable to meet.

All games from the serie "Dead Space"