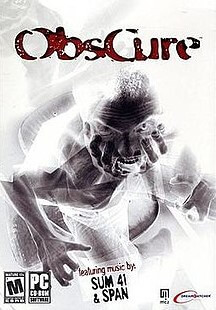 Obscure is a survival horror video game developed by Hydravision Entertainment and published by DreamCatcher Interactive in North America, Ubisoft in China and MC2-Microïds in other territories for Microsoft Windows, PlayStation 2 and Xbox. It was released on October 1, 2004 in Europe and on April 6, 2005 in North America.

Strange things are happening at Leafmore High. Three teenagers set out to search for their missing friend. Finding themselves locked inside the school overnight, they now have to get to the bottom of the strange occurrences.

The player controls the five teenagers as they explore the school and battle a number of different types of infected students. The students discover that the enemies are sensitive to light, with direct sunlight being able to destroy them. Flashlights help to slightly weaken their foes and the malevolent black aura surrounding them.

The students discover a conspiracy involving injections turning students into mutated monsters, mostly experimentations based on a rare plant spore, with the possibility to allow people to live forever. It is discovered that the nurse, Elisabeth, and principal, Herbert, are over 100 years old but seem only to be in their 60s, thanks to the tests they performed on each other.

The students later come across Herbert, who is killed by a teacher seeking to cure himself of the infection caused by Herbert's experiments. Herbert's twin, Leonard, sees his dead brother and becomes angry. He murders the teacher and then leaves the teenagers to defeat the biggest mutant seen yet.

After defeating him, they return to the gym and inject themselves with the cure. However, Leonard returns and after a battle, Leonard gives into the sunlight and everything is back to normal.

Obscure gives players the ability to control and switch between any of five playable characters. Given that he or she will be playing in pairs of characters, the other characters will be computer-controlled, or a second player can join in at any time.

Obscure has a two-player cooperative mode that allows the player to complete the campaign with a friend. The game also allows players to combine items, for example taping a flashlight to any firearm. Some critics, including X-Play, have stated that this was the only redeeming quality, and mocked id's Doom 3 for not implementing such a concept.

While each character has special abilities, none of them are necessary to complete the game. Each character can perform the same physical acts even if it takes some characters longer and/or more effort than others. If any characters die during the adventure, the player may simply continue with those remaining.