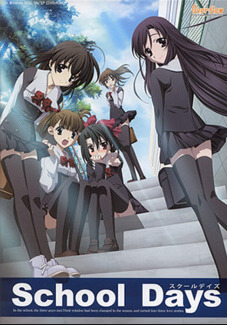 School Days (スクールデイズ Sukūru Deizu) is a Japanese visual novel developed by 0verflow, released on April 28, 2005, for Windows as an adult game. It was later ported as a DVD game and for the PlayStation 2 (PS2) and PlayStation Portable (PSP). The story, a dramatic slice-of-life, follows Makoto Ito, a high school student who becomes the ambivalent love interest of several girls during his second term, and the effects this has on himself and his relationships with other characters. Though the game requires little interaction from users, School Days engages the player through a plot that they are given opportunities to change the course of during play. The game concludes with an ending specific to the outcome of the story, some of which became notorious for their graphic violence.

0verflow announced work on School Days in October 2004 and marketed it through public venues that showcased the game's innovative use of anime-like cinematics and voice. The game ranked as the best-selling visual novel in Japan for the time of its release, continuing to chart in the national top 50 for nearly five months afterward. 0verflow would then go on to produce multiple sequels including a spin-off of the original story called Summer Days, and a parallel story called Cross Days. Another spin-off, Island Days, has been developed by Klon for the Nintendo 3DS. School Days was remastered as School Days HQ on October 8, 2010, and localized in North America on June 27, 2012. The original game was officially discontinued April 21, 2011.

Following the game's release, School Days made several transitions into other media. The original story was adapted into a manga and serialized in the Kadokawa Shoten magazine Comp Ace; it was later published into two volumes. Comic anthologies, light novels and art books were also published, as were audio dramas and several albums of music. An animated television series, two direct-to-video (OVA) single releases, and a concert film were also produced, the first of which became a precursor for an internet meme when its finale was pulled from broadcast.

Each route the game takes invariably concludes with an ending specific to the choices made up to that point. Depending on these choices, the outcome of the story will either be good or bad. School Days became popularly known for its bad endings, which depict the deaths of characters. In one ending titled "The Bloody Conclusion", a crazed Kotonoha slits Sekai's jugular vein open with a dōzuki, causing Sekai to collapse and die in a fountain of blood to the manic laughter of her assailant and the horror of Makoto. In another called "Eternally", Kotonoha commits suicide leaning over and falling off the roof of a school, landing headfirst on a sidewalk to the horror of Makoto and Sekai. The game's good endings, by contrast, depict the well-being of characters and their relationships. In the ending "Christmas Eve", Makoto and Kotonoha share an embrace and make love in a hotel room as snow falls around a surrounding cityscape. In another titled "Two Lovers", Kotonoha and Sekai agree to have a polyamorous relationship with Makoto instead of rivaling with each other. Because of the numerous alternate endings that can be achieved, players who wish to watch additional endings and sex scenes will have to play through the game more than once.

Unlike traditional visual novels that consist of static characters with subtitled dialogue, School Days is unusual in that it incorporates motion and voice, making it reminiscent of an animated series. Cinematics naturally play on their own, and players are afforded the ability to pause, fast-forward, and even skip those they've seen before. Male and female voices can be muted, subtitles can be turned on or off and the game can be played from a window or fullscreen ratio. Progress can be saved at any time in up to 100 slots and loaded from either the main menu or during play.

School Days focuses on the life of Makoto Ito, a first-year high school student living with his divorced and unseen mother in the fictional city of Haramihama. During his second term, he becomes infatuated with Kotonoha Katsura, a soft-spoken schoolmate who shares train rides with him to and from campus. When his homeroom seating plan is rearranged, he becomes acquaintances with Sekai Saionji, an upbeat girl who takes a special interest in his newfound crush, befriending the two and providing them the grounds to meet. In spite of her triumphant efforts however, Sekai becomes jealous of the new couple, having developed feelings for Makoto herself.