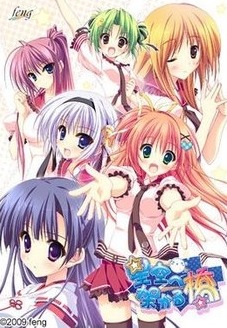 Hoshizora e Kakaru Hashi (星空へ架かる橋), sometimes shortened to Hoshikaka and also known by the translation A Bridge to the Starry Skies, is an adult visual novel developed and published by Feng, released on October 15, 2010 for Windows. The story, a mostly comedic slice-of-life, centers on Kazuma Hoshino, an adolescent boy who moves into rural Japan with his brother, and the personal and romantic encounters he has with a handful of the female residents there. Though the game requires little interaction from users, Hoshikaka engages the player through a nonlinear plot that they are given opportunities to change the course of during play.

Feng announced work on Hoshizora e Kakaru Hashi in May 2009 and marketed it through public venues and the broadcast of a radio drama throughout development. The game was postponed a total of nine times and released almost a year after its initial date but was met with relatively positive reception. On November 11, 2011 Feng announced work on a fan disc for the game, set to be released on February 24, 2012.

Following the game's release, Hoshizora e Kakaru Hashi made transitions into other media. Two volumes of a manga were published, as was an art book, audio dramas and several albums of music. A twelve-episode animated television series and direct-to-video (OVA) single release was also produced by Doga Kobo.

As a visual novel, Hoshizora e Kakaru Hashi contains extremely minimal gameplay. The game is presented in a traditional fashion, with static backgrounds and moderately altered character poses viewed from a mostly first-person perspective. At predetermined intervals, the game stops, and players are presented with one to two responses or actions relevant to the scene in progress to make, or not make, on behalf of characters. Each selection branches the game's progress up to that point in an alternate direction, while also causing the player's love toward a character to blossom, plateau, or diminish, thus providing for a nonlinear storytelling experience. Being an erotic title, relationships between characters may expectedly become sexual; scenes of this kind depict a varying combination of groping, oral sex and intercourse.

Kazuma Hoshino is a high school student who, along with his younger brother, Ayumu, moves from an undisclosed city in Japan to the rural town of Yamabiko on account of Ayumu's asthma. While settling into their new surroundings the brothers become acquainted with several locals including Ui Nakatsugawa, Ibuki Hinata, the Toudou sisters and Madoka Koumoto, among others. The story details the brothers' adventures with their new friends.

Hoshizora e Kakaru Hashi follows the life of Kazuma Hoshino, a teenage boy who moves to the fictional rural town of Yamabiko with his younger brother, Ayumu, on account of Ayumu's asthma. Kazuma loses his way in the forest after chasing a monkey that stole Ayumu's hat and meets Ui Nakatsugawa, a cute and cheerful, if airheaded, schoolgirl whom he takes an almost immediate liking to. As they make their way back to where Ayumu is waiting, Kazuma learns that Ui is fond of cooking, has a refined sense of taste, sports a nearly insatiable appetite, and by extension, loves eating. During their walk through the forest Kazuma also becomes acquainted with Ibuki Hinata, Ui's temperamental spitfire of a best friend. In spite of his admirable efforts to make up for his faux pas, Ibuki does not hold a high opinion of Kazuma until much later when his genuinely positive and friendly qualities lead to her developing feelings for him.

After returning to Yamabiko, Kazuma and Ayumu become acquainted with a number of other people. Senka Yorozu is a friend of their father's and the landlady of Yorozuyo Inn where they stay. She is a gregarious woman, with a penchant for drinking. On the way to school the next day they meet Tsumugi Toudou, a down-home, third-year senior, who familiarizes the boys with the town and its culture. At school Kazuma becomes friends with Daigo Minamikokubaru, a classmate with a fondness for online games and always imagining nude girls. He is also the son of their homeroom teacher. Kazuma later meets Hina Sakai, a tall and quiet girl with a fondness for anything cute.

On their way back from campus, Kazuma and the group wait for Ayumu to join them from his middle school. Ayumu arrives in the company of Kasane Toudou, Tsumugi's youngest sister, a sweet-natured, blue-haired girl known around the town for her interest in gossip. In touring the community, everyone makes their way to the local Shinto shrine, where the miko and daughter of the priest, Madoka Komoto, is introduced to the boys. Much to their surprise, Madoka runs off in a panic at the sight of Kazuma, something that happened again at school the next day. He returns to the shrine the following afternoon to see her again but is interrupted by Koyori Toudou, the middle Toudou sister (younger than Tsumugi and older than Kasane). With a similar personality to Ibuki (loud and brash), Koyori similarly does not welcome Kazuma until his kindness shows through, such as when he breaks her fall from a tree.