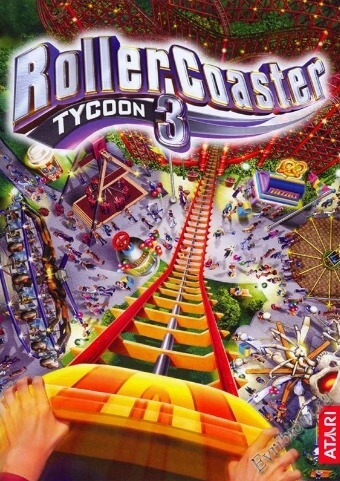 RollerCoaster Tycoon 3 features two methods of gameplay. In career mode, players must complete predetermined objectives in predesigned scenarios. In the newly added sandbox mode, players have unlimited time and money to create their own custom parks and rides. Features introduced in the series include the ability to import and export custom attractions, design custom scenarios and peeps, as well as design an in-game roller coaster and a fully three-dimensional world players can view from all angles.

Like the previous games in the series, RollerCoaster Tycoon 3 is a strategy and simulation game in which players manage all aspects of an amusement park by building or removing rides, scenery and amenities, placing shops and facilities, adjusting the park's finances, hiring staff, and keeping the park visitors, known as "peeps", happy. RollerCoaster Tycoon 3 features two main game modes. The career mode features scenarios where players must accomplish goals, such as impressing a visiting celebrity or attaining a certain park rating. Each scenario has three levels of objectives, which are ranked as Apprentice, Entrepreneur, and Tycoon; the higher the level, the more challenging the goal is to complete. A third of the scenarios are playable from the start, with the rest unlocked when the player completes the objectives at each level. The second mode of play is the sandbox mode. Players are given a large, empty plot of land and unlimited funds with which to build their own custom parks. However, the land given in this mode is limited as it cannot be expanded.

RollerCoaster Tycoon 3 introduces gameplay features in the series such as the CoasterCam, which allows players to "ride" roller coasters and other rides, and the MixMaster, which allows the player to coordinate firework shows and time them to in-game music. Unlike the two previous versions of the game, RollerCoaster Tycoon and RollerCoaster Tycoon 2, the guests, called "peeps", arrive in groups and show variation in gender and age, including children, teenagers and adults. A day/night cycle changes the demographics of the park's peeps; rides at night appeal to teenagers, while the daytime attracts families with children. Peeps can be harmed and injured by crashing vehicles, but will never die as they did in the previous titles, and if placed in water they will swim out. When cars derail from the tracks, they explode after a short period, whereas in the older games, they exploded on contact. Furthermore, a feature was added in which, after a cheat code was entered, people could utilize the Peep Cam from which they could see the park through a peeps' eyes. Parks now have opening and closing times, and the time of day is displayed. Scenery is divided into themes to customize parks, with western-, spooky-, science fiction-, prehistoric-, tropic (Paradise Island)- atlantis- and adventure-themed pieces. Another feature is the ability to import coasters from previous games in the series into RollerCoaster Tycoon 3. The game uses full 3D graphics instead of the isometric viewpoint of the previous games; this means that players can rotate and zoom the view of the park to any degree. However, there is an option to fix the camera's rotation to a preset angle, as in the previous games. 3D land shaping is also available for creating mountains and hills inside the park, as well as the ability to change portions of the land into water.

RollerCoaster Tycoon 3 received mostly positive reviews. The game has an average rating of 81/100 at Metacritic and 84% at GameRankings. Publications such as GameSpot and Computer Gaming World were overall positive about the game citing its many new features. However, fans of the original and the second game in the series tended to be more critical. Several other criticisms stemmed from bugs and technical issues, such as the game crashing, the camera freezing, staff getting stuck on railings, low framerates and graphical glitches mainly caused when adjusting the landscape.

The editors of Computer Gaming World nominated RollerCoaster Tycoon 3 as their 2004 "Strategy Game of the Year (General)", although it lost to The Sims 2. They wrote that it "overcame the series' sophomore slump with a great state-of-the-art design."

According to The NPD Group, RollerCoaster Tycoon 3 was the ninth-best-selling computer game of 2004. It claimed fifth place on NPD's annual chart for the following year. The game also received a "Silver" sales award from the Entertainment and Leisure Software Publishers Association (ELSPA), indicating sales of at least 100,000 copies in the United Kingdom.

In June 2015, Frontier CEO David Braben reported that the game had sold "more than 10 million copies".