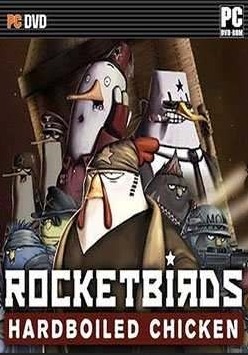 Rocketbirds: Hardboiled Chicken is a platform adventure game created and developed by Ratloop for Microsoft Windows, PlayStation 3, and PlayStation Vita. Thanks to Humble Bundle, the game was also ported to OS X and Linux in September 2013. Hardboiled Chicken is a cinematic adventure game with full single and co-op campaigns and stereoscopic 3D support.

Rocketbirds: Hardboiled Chicken is an adventure platform game in which the player controls Hardboiled Chicken. The player unlocks many different weapons throughout the campaign, with which they have to dispatch enemies of different ranks. The game balances brutal shootouts and puzzling elements, keeping the player alert. In the co-op campaign, two players can complete the missions together. The maps are the same as in the regular campaign, except the puzzles have to be solved in different ways as the characters are smaller and both players have to help each other to be able to progress.

Hardboiled Chicken is given a mission to find and kill Penguin dictator Putzki in order to set free the citizens of Albatropolis. In the co-op campaign, the main mission is to rescue the general's daughter and bring her back alive.

A sequel titled Rocketbirds 2: Evolution was released in 2016.