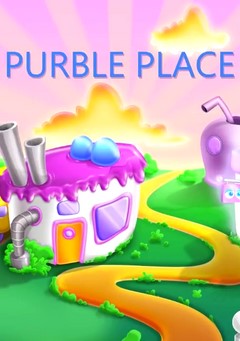 Purble Place is a suite of three computer games. Developed by Oberon Games for Microsoft, it was introduced in Windows Vista and also is included in Windows 7.

Purble Place was publicly introduced in Windows Vista build 521 along with Chess Titans and Mahjong Titans.

The collection has a single home screen that offers three packs of games: Purble Pairs, Comfy Cakes, and Purble Shop.

Purble Pairs is a pattern recognition and memory game similar to Pelmanism. The object is to clear the tableau in the fewest turns. As the skill level progresses, the game becomes timed, the grid size increases, and more similar pictures are used. The Beginner level has one 5x5 grid, Intermediate has two 6x6 grids, and Advanced has four 8x8 grids to solve per game. In addition to a joker that automatically finds another match of an exposed card, numerous special pairs are present in the higher levels: such as a card of the batter machine in Comfy Cakes that shuffles the board when paired, a clock that adds more time to the timer, and a Master Chef that automatically finds and matches pairs of cards containing cakes. A sneak peek coin bonus allows the player to expose all remaining cards for a couple of seconds, but every card exposed in this way is counted as a turn.

Comfy Cakes is a hand-eye coordination game. The object is to fill orders in a bakery by assembling a cake to match a given specification, by controlling a conveyor belt that brings the cake to various stations. Elements of the cake include shapes (square, circular or heart-shaped), flavor of batter (strawberry, chocolate or vanilla), optional icing (flavors as used in the batter) and other decorations (e.g. sugar may be sprinkled on top of the cake, and in rarer cases, flames are applied to iced cakes to create a smooth glaze). If the cake does not match the specification, the player is penalized and the cake gets thrown in the trash. If the player sends three incorrect orders, the game is over. After a certain number of correct orders are shipped, the player wins the game, and the score is tabulated. The final score depends upon the number of cakes baked, the number of incorrect orders sent and the efficiency of the player in baking. At higher levels the specifications become more complex and multiple cakes must be manufactured in parallel on a single conveyor belt. The player makes about 5 or 6 cakes in one of the difficulty levels.

Purble Shop is a code-breaker game. The computer decides the color of up to five features (hat, eyes, nose, mouth and clothes) that are concealed from the player. Any color may be used for any feature, and a color can be used once, several times or not used at all. The player then attempts to deduce or guess the correct feature colors in a limited number of moves. There are three difficulty levels: Beginner with three features in three possible colors for 33 = 27 different possible solutions, Intermediate with 44 = 256 solutions, and Advanced with 55 = 3125 solutions. The beginner and intermediate levels are guessing games where after each move the computer tells the player which items were correct, so there is little scope for deduction. At the advanced level the computer doesn't tell the player which specific items were correct, reporting only the count of picks in the correct color and position, and the count of picks in the correct color but the wrong position. This level is similar to the colored peg game Mastermind where success requires logical reasoning (although, there is a small chance of succeeding through lucky guesses).