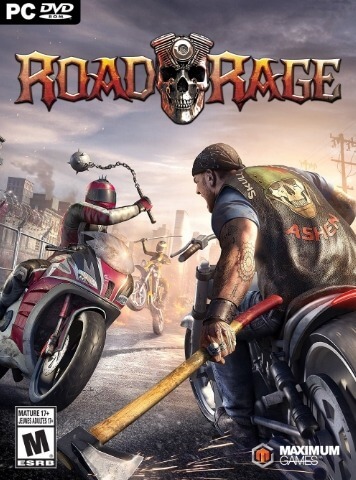 Road Rage is a 2017 vehicular combat racing video game developed by Team 6 Studios and published by Maximum Games, released worldwide on November 14, 2017 for Microsoft Windows, PlayStation 4 and Xbox One. The title was inspired by the famed Road Rash series of video games, which feature similar gameplay mechanics.

Road Rage is set in the open world, fictitious city of Ashen. Players ride around on a motorcycle and are free to explore the city at their leisure. Ashen itself is divided into seven districts, ranging from the downtown core to suburban farmland. Gameplay in Road Rage is composed mostly of standard "circuit" races, time trials, the performing of stunts and assassinations of rival bikers, all of which and more are encountered throughout the campaign. While racing, players are armed with melee weapons which may be used to attack opponents. Combat takes place entirely on the bike while driving, with players being able to simultaneous accelerate and hit opposing racers with weapons such as baseball bats, hockey sticks, axes and long knives. The motorcycle can be upgraded via cash won from events, with an option to buy improved vehicles and additional weapons present as well.

The game features both split-screen and online multiplayer alongside the single player campaign. Both modes feature up to four players in events similar to those found in the campaign.

Upon release, Road Rage received overwhelmingly negative reception from professional gaming journalists. The PlayStation 4 version holds a 27 on review aggregator Metacritic, while the Xbox One version holds a 33. Critics cited nearly every aspect of the game as being underwhelming, including the combat, driving, presence of numerous glitches, poor graphics and empty world.