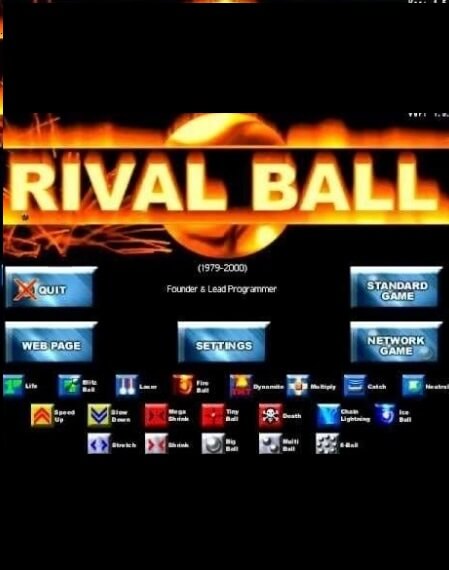 Rival Ball is the sequel to the PC Breakout clone DX-Ball 2 from Longbow Digital Arts. Released on March 19, 2001, the game features square bricks and online split-screen multiplayer. It introduces a cursor-based layout with buttons for navigation, two new power-ups, the ability to save and resume games, and game options for randomising board order, setting timers, repeating board-sets, and choosing between four difficulty levels. The game also plays all the original DX-Ball 2 boards. A Mac version was announced on April 3, 2002. Rival Ball was the first game from Longbow Games to succeed the passing of Seumas McNally (1979–2000), the company's founder and lead programmer. Rival Ball was followed by Rival Ball Tournament in 2004.

The object of the game is to clear a field of bricks using a paddle and a ball. Most bricks are cleared upon impact with the ball, while some bricks may take multiple hits, be invisible, blast surrounding bricks, or appear unbreakable. Once all breakable bricks on the board have been cleared, the player advances to the next board. As bricks are being cleared, power-ups will frequently launch onto the screen (see Power-ups). The player may choose to catch these with the paddle, which in turn will bring about various effects in the game. For instance, some power-ups may speed up the brick-breaking process by introducing laser guns and explosives into play, while others may affect the difficulty by shrinking the paddle and speeding up the ball.

Standard Game offers the classic brick busting experience. The player may select a desired set of boards to play, whereas the game initially comes with two freeware board-sets of 4 boards each. As an added bonus, Rival Ball also includes the six demo board-sets from DX-Ball 2, with support for the five respective board packs from the game. Before a game starts, the player may set additional game options, including difficulty, time limits, randomised board order, and board-set repeat.

The difficulty levels range from Easy to Medium, Hard and Impossible, and will determine several factors for the game. As the game's default setting, Medium implies a standard game with no specific alterations. On the other hand, Easy lets the player start with a big ball and expanded paddle, with the paddle size being fixed to not contract beyond the initial width. Easy also excludes three of the game's Power-Ups, including Death, Tiny Ball and Mega Shrink. If the chosen difficulty is Hard, the game starts with the regular paddle size, but a small ball. While the paddle cannot be expanded beyond its initial width in this mode, the ball can only grow to its regular size. Hard is also the only difficulty setting to introduce timed power-ups, where the effects from Blitz Ball, Laser, Fire Ball, Ice Ball and Catch are only temporary. The last difficulty setting is Impossible. While all power-ups are absent in this mode, the game starts with the most narrow paddle size and a tiny ball fixed at the highest speed. The additional game options are optional and can be used in conjunction with one another. By enabling Time Limit, the player may compete against the clock with settings of 5, 10, 15, 20 and 30 minutes to complete a board-set. Random Boards will randomise the order of the boards in the chosen board-set. Lastly, Repeat Board-Set will repeat the total set of boards up to ten times in a row. When the player has completed a board, a Board Bonus will be added to the total score. Constituted by three elements, the player may earn a 'Balls Left' bonus rewarding 50 points for each additional ball left on the screen; a 'Perfect Ball' bonus rewarding 500 points if no balls were lost during the board; and a 'Perfect Brick' bonus of 250 points if all bricks were cleared. In addition to the Board Bonus, the completion of a board-set will also be summarised by a Set Bonus, consisting of a 'Paddles' bonus rewarding 250 points for each remaining paddle left; a 'Perfect Bricks' bonus rewarding 3000 points if all bricks were cleared across the entire set; and a secondary 'Perfect Ball' bonus rewarding 4,000 points if the board-set was completed without losing a single ball. Aside from single player, Standard Game also features a Hot-Seat multiplayer mode. In this mode, players take turns to clear a board-set, playing through the same boards successively, while competing to achieve the highest score. Turns are changed either when one player completes a board or loses a life, and the game goes on until all players have either finished the board-set or lost all spare paddles.

As the core concept of the game, Network Game is what puts the "Rival" in Rival Ball. With a 1-on-1 split-screen multiplayer mode, the majority of the game's board-sets are specifically designed to mirror horizontally at the middle of the screen. While these boards may be played in their entirety in a standard game, a horizontal bar will split the screen in a network game, dividing the boards into two equal parts. The local player will then be busting bricks on the lower part of the board, while the progress of their opponent will be reflected on the upper half of the screen. To get started with the online gaming, the game features a lobby where players may gather to host and join games. Communications can also be conducted via sending messages or creating a chat room.

Upon the first visit online, the player is automatically connected to the game's default game room. A prompt is then made to create an online account by defining a username and a password. This is kept on the game's server to record the player's number of wins, losses and quits, and their rank. Alternatively, players can create and host their own hidden or public game rooms, operating as a server for other players to join. However, online accounts and their corresponding stats are limited to the specific game rooms that they were created within.

Once the player is connected and logged in, a game may be hosted for others to join; or the player may choose to join a game hosted by someone else. Initially, only one of the game's two board-sets can be played online, as Rival Ball Split is the only board-set which features mirrored split-screen boards. On the other hand, owners of the full version and Rival Ball Series 2 will have a variety of board-sets to choose from (see Board packs); although, these can only be joined by players who have the respective boards installed. Once a game has been hosted, a green check mark will appear next to the player's username in the lobby, indicating that a game is ready to be joined. Incidentally, online games do not feature additional game options, aside from setting the difficulty of the hosted game. When playing against an opponent, the object of the game is simply to score the most points. The concept of having spare paddles and losing in-game does not apply for online games, so the loss of a paddle will only result in a short delay and revert the effects of any active power-ups. As with standard games, the completion of a board will award the player a Board Bonus, giving a slight advantage to the player who first clears the board. However, the final Set Bonus does not apply for online games. Once the board-set has been completed, the player with the highest score is deemed the winner, and the result is added to the stats of each player respectively. If a player chooses to quit during a game, the forfeit will be added to their quits. However, no win is recorded for the other player.