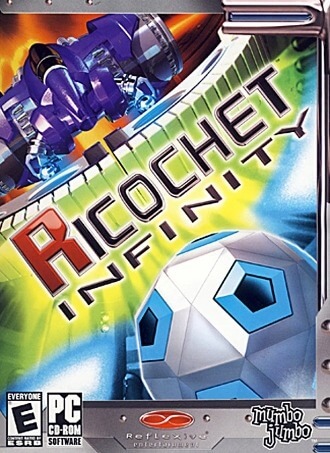 Ricochet Infinity is the fourth installment and final entry of Ricochet video game series by Reflexive Entertainment. As its preceding titles Ricochet Xtreme (2001), Ricochet Lost Worlds (2004) and Ricochet Lost Worlds: Recharged (2004), it is a Breakout clone. As in Atari's Breakout game, the purpose of each stage is destroy all the bricks on the screen. Like the rest of the games in the Ricochet series, Infinity is more stylized than Breakout, adding various power-ups and brick variations.

The "infinite" in the title stems from the fact that new stage sets have been released on a weekly basis.

In September 2010, Ricochet Infinity was released for the iPhone app store. The mobile version of the game makes use of motion sensitivity of the device as a gameplay mechanic.

The gameplay of Ricochet Infinity follows the previous trends. The player controls a paddle shield that attached to player ship. You must keeps at least one ball (called ion sphere) to stays on screen in play as very long until you cleared all blocks. The objective is break all breakable blocks in the level by hitting these blocks with the ion sphere(s), lasers or missiles. An ion sphere can be bounced on the shield. If no ion sphere remains on-screen, the player loses a life. If the player has no lives remaining, the player loses the game and must restart the stage from the beginning.

There is no storyline; instead, levels are divided into sets called planets, and completing all stages in each planet will unlocks the next planets. The planets are divided into two episodes; the first episode is Episode 1: Ricochet Infinity, which is available by default. And the second one Episode 2: Delta Quadrant; these can be unlocked after completing all planets of the first episode.

Ricochet Infinity has a revamped level editor that allows much more complicated movements etc. in a level. This level editor allows the players to create their own levels, which can be shared to the world. Unlike the other series, it has a Level Downloader to download created levels (while Ricochet Xtreme has no level downloader, and Ricochet Lost Worlds and Ricochet Lost Worlds: Recharged user-created levels must be downloaded manually from the internet).

However, the ability to add custom backgrounds, bricks, environment styles and other developer build functions were removed.