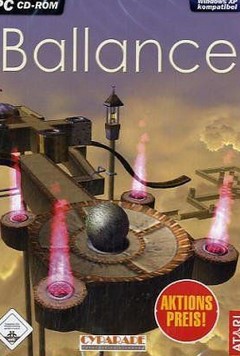 Ballance is a 3D puzzle video game for Microsoft Windows. It was developed by German studio Cyparade, published by Atari and first released in Europe on 2 April 2004. The gameplay is similar to Marble Madness: the player controls a ball via mouse and keyboard, moving it along a course while trying not to fall off the screen.

In the game, the player can change the ball's material with special changers throughout the game's 12 levels. It can be transformed into a wood, rock, or paper ball.

The wooden ball is very stable and can be used for several puzzles in the game. It is the very first ball, used in the easy levels.

The stone orb is extremely heavy, and can be accidentally rolled off an edge very easily, but this ball can easily push down boxes and bridges. Rolling a rock ball through a bridge made of planks will make the bridge collapse.

The paper ball is very light. Its surface is not smooth, unlike the wood and rock ball, and so its movement is slightly variable. A paper ball can be blown into the air by fans and can roll up steep hills easily.

Two power-ups are available. If the ball rolls into them they provide either an extra ball or extra points. Checkpoints are scattered evenly across levels so that if a player falls off the course they only have to restart the game from the last checkpoint reached.

There are 12 different levels. As the player navigates the ball along a path each become more difficult than the last. On occasion, the player has to push other balls down holes or onto rails to continue rolling along the path. Each level requires the player to complete physical challenges, which often have more than one puzzle to solve. The side-rail is introduced in level three. The player's ball needs to roll on its side along two rails which are aligned vertically one above the other. In level 12, the player's ball has to balance on the center of only one rail.

An additional level 13 was Twilight Zone, which was available for free on the developer's homepage.

RFactor 2
giahfranco luzi, 04.06.20
If somebody dont know how make it work, all you need to do is extract the .mdf file, next install with "instalmode.exe" or something like that and finally execute the [no dvd patch] were the game was installed. Sorry if my english is no so good. Bye bye