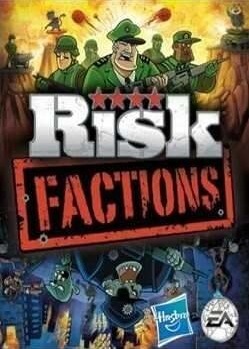 Risk: Factions is a downloadable video game for Xbox 360's Xbox Live Arcade service (discontinued as of 2014), PlayStation 3's PlayStation Network, and Windows computers through Steam. The game was announced on January 12, 2010 for Xbox 360, December 21, 2010 for PlayStation 3, and March 8, 2011 for Windows. It is based on Hasbro's popular board game, Risk. The game has both single player and online modes of play. The single player campaign is divided into 5 chapters. Each chapter unlocks one of the game's five factions. The gameplay in the single player campaign is similar to that of the 2008 Risk rule set. Players must complete three objectives and have control of their capital to win the game. Alternatively, a player may defeat all the opponents to win the game as well.

The features added to RISK: Factions that do not appear in the 2008 rule set are overkills and terrain features. Overkills are awarded when players roll either two or three sixes. If a player rolls two sixes, he destroys twice as many units as he would normally. If a player rolls three sixes, he destroys all the opponent's units in the current battle.

Some maps also have special terrain features like the volcano, which can erupt and kill most surrounding soldiers, or the temple, which allows a player who has captured it to convert another country of his choice and all units within it to his color.

Cats - Color: Yellow - Leader: Generalissimo Meow - A Hispanic-sounding cat dressed like Mao Zedong. Launches an attack on the Humans after a mortar is "accidentally" dropped on his country (courtesy of McGutterpants' dog) and McGutterpants refused to apologize.

Robots - Color: Red - Leader: Commandant SixFour - An untested automated defense system built by the Humans. Unfortunately, due to its obsolete graphics technology, it is incapable of distinguishing friend from foe and declares war on the rest of the factions. His name is a reference to the Commodore 64.

Zombies - Color: Black - Leader: Colonel Claus Von Stiffenberg (a.k.a. "Stiffy") - A hook and eyepatch-wearing zombie who declares war on the other factions after being attacked by the Humans. Like the rest of the faction, he was presumably either an ordinary human or a revived corpse, mutated by an experimental bioweapon launched by Commandant SixFour. His name is a reference to Claus von Stauffenberg.

Yetis - Color: Blue - Leader: His Excellency Gary - A Buddha-like Yeti Monk with a jovial attitude like the Dalai Lama. Ironically, he declares war when General McGutterpants asks his help to bring peace with the other factions.

Risk: Factions received generally favourable reviews upon release, with a Metacritic average of 77%.

Destructoid praised the developer for not just making a copy of the traditional board game with the console version. The reviewer said: "Clearly a lot of time was put into making sure Factions not only overflowed with personality, but was also able to capture the interest of new players. I can't recommend this game enough, especially at such an affordable price."

1UP.com said that "while the factions aspect could have been fleshed out a bit more, the title still stands as a solid update to the game and a worthwhile purchase for strategy fans."