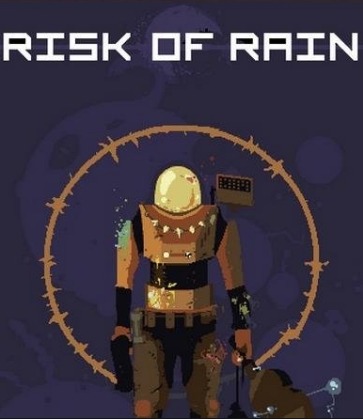 Risk of Rain is a roguelike platform video game incorporating both Metroidvania and roguelike elements, developed by a two-student team from the University of Washington under the name Hopoo Games. The game, initially a student project, was funded through a Kickstarter campaign to improve the title, and was published by Chucklefish to Microsoft Windows in November 2013. OS X and Linux versions premiered as part of a Humble Bundle in October 28, 2014. Ports for the PlayStation 4 and PlayStation Vita, developed with assistance from Code Mystics, were released on April 12, 2016. An Xbox One version was released on August 30, 2019.

The player controls the survivor of a space freighter crash on a strange planet. As the player progresses through levels, selected randomly and with some procedural placement of objects within the level, they attempt to survive by killing monsters and collecting items that can boost their offensive and defensive abilities. The game features a difficulty scale that increases with time, requiring the player to choose between spending time building experience and completing levels quickly before the monsters become more difficult. By discovering various hidden locations, players can discover artifacts which can alter gameplay. The game supports up to ten cooperative players in online play and up to two players in local play.

At the start of the game, each player selects one of twelve characters. Initially, only one character is available which is the Commando, but as the player completes various in-game objectives, more characters become available. Each character has various statistics and a set of unique moves; for example, the sniper has the ability to hit creatures from a long distance for large, piercing damage but their firing rate is slow, while the commando can do rapid, moderate damage at close range.

Within all but the last level of the game, the goal is to locate a teleporter, placed in a random location. As the players hunt for it, they will encounter monsters; upon death, the monsters will drop in-game money and will also provide the players experience. As the players gain experience they will increase the player level, gaining more hit points and stronger attacks. Money can be used to open various chests, buy items at stores, activate attack drones that aid in combat, or pray at shrines that have a random chance of dropping items, described by game lore as the space freighter's cargo. There are over 110 items in the game, and these provide benefits such as passive bonuses that improve offensive or defensive capabilities, or a special usable with a cooldown. Players can only hold one usable at any time, but they can collect many passive items, including multiple versions of the same item, stacking the benefits of these items. The location of these items is randomly determined through roguelike procedural generation.

The difficulty of the game is determined by a timer. The difficulty level increases every 5 minutes up through 10 levels, with newly spawned monsters having more health and stronger attacks. Additionally, boss characters may spawn before the players have found teleporters on higher difficulties. If playing alone, the game is over when the player dies. In multiplayer mode, a player that dies must wait until the other players survive to the next level, upon which they are brought back into play.

The item drops are based on the various progress the player has made in the meta-game through repeated playthroughs. For example, defeating certain boss characters for the first time will unlock an item that can then drop in future playthroughs. Other items are based on completing certain goals, such as winning the game a number of times, or performing specific goals with each of the characters. In Rainstorm or Monsoon modes, monsters will also rarely drop log books that describe the monsters; this itself is used to unlock more items and a playable character.

Risk of Rain was named one of the Student Showcase winners of the 2014 Independent Games Festival, and subsequently won the Student Prize Award.

By the time of the release of the sequel in 2019, Risk of Rain had sold more than 3 million copies.