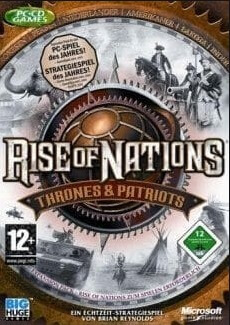 Thrones and Patriots expanded on a variety of features in the original game, such as new monuments (called "Wonders"), nations, governments, and campaigns. Gameplay still remains similar to Rise of Nations, with its wide span of ages and players still manage and expand their nations at the macro and micro levels. However, Thrones and Patriots has campaigns which offer more turn-based strategy features than the original and the ability to make decisions outside of combat. Up to eight players can play in multiplayer matches, with artificial intelligence being able to fill slots at the server host's choice.

Tim Train, executive producer of Thrones and Patriots, stated that various features were added to the game in an attempt to balance gameplay, including the addition of armed caravans and merchants. IGN claimed that Thrones and Patriots is "a great game which gets better," in reference to its predecessor Rise of Nations and other critical reviews also praised many features of the game, though some noted deficiencies.

Within Rise of Nations: Thrones and Patriots players control various units during battles, including land, sea, and aerial units. Units used during gameplay include slingers, musketeers, tanks, large Persian war elephants, aircraft carriers, and nuclear missiles. Players progress in different ways in Thrones and Patriots by using various means including espionage, political strategy, technology races and population growth. The gameplay takes place from ancient history to modern times. Players are able to lead their nations at the macro and micro levels, and build their nation up and expand it throughout the game.

Thrones and Patriots added six new nations to the original Rise of Nations game. The 'New World' situation playable in the game was enhanced by the introduction of the European nation—the Dutch. Three North American nations were added, the Americans, referring to the ex-colonial civilization, and two Native American nations were added, which were the Lakota and the Iroquois. Two Asian nations, the Indians and the Persians, were introduced. The other nation to be added was the Dutch. New Wonders were made available for building, such as the Hanging Gardens of Babylon, the Forbidden City, and the Red Fort.

New features of the game were added to the new nations, for instance the Lakota, which is unable to build farms to generate food, instead receive a constant food supply for each of their citizens, scouts, and cavalry units. They can make buildings in any region that is not possessed by their enemy, can raze buildings quickly, receiving a full refund. Additionally, they receive resources when enemy resources are destroyed.

Rise of Nations: Thrones and Patriots added four new "Conquer the World" campaigns: Alexander the Great, Napoleon, the New World, and the Cold War. The Alexander the Great campaign allows the player to choose whether or not to raze or incorporate conquered territories. A player's decision to raze may cause the rest of the enemies to either fight harder, or question their casus belli and ally with you. The Napoleon campaign challenges the player to conquer Europe in a limited amount of time, with diplomacy, alliances, conquest, and bribing with land. Players must have intuitive leadership in this campaign because faulty decisions by the player can force themselves, that is to say, Napoleon, into exile. The New World campaign allows the player to choose either the Americans, a European power, or a Native American tribe. If the player chooses to lead the Americans, they must pay taxes to Great Britain, until they declare independence. The map of a battle incorporates the region's environment, for example large forests in the Pacific Northwest. The Cold War introduces the ability to fire nuclear missiles in the main map and initiate espionage missions. Armies can also move anywhere in their nation's territory without using up a turn. Rise of Nations: Thrones and Patriots' campaigns now offer more turn-based strategy into the game rather than real-time strategy being the only gameplay aspect.

Once the player builds the Senate building, he or she may choose a government "upgrade" of either a Despotism or a Republic, each giving the player a different permanent gameplay bonus. Each government has a different "Patriot", effectively a stronger version of the "General" unit with different bonuses, depending on which government is chosen. They are used during combat to assist players in battle. A player can only have one Patriot unit at a time. When a Patriot unit is killed, a new one is automatically created in the Senate afterwards.

After reaching the Gunpowder Age, the player may choose to upgrade to either a Monarchy or a Democracy, each with its own different permanent gameplay bonus, and then after reaching the Industrial Age, the player may upgrade again, to either Capitalism or Socialism. The previous gameplay bonuses remain, allowing players to select the most appropriate combination of benefits as the game evolves.

Rise of Nations features a highly customizable multiplayer mode. Up to eight players can play in a game with a variety of modes to choose from, with AI filling spots at the server host's choice. GameSpy Technologies had hosted matchmaking and other servers for multiplayer games played online through their dedicated server until December 2012. A new feature that was introduced into the game was the ability to use homemade scripts in online play. The scripts are able to be made in the built in script editor, and came with a pre-made script that disallowed missile silos.

(0) Comments on "Rise of Nations: Thrones and Patriots Full Version"