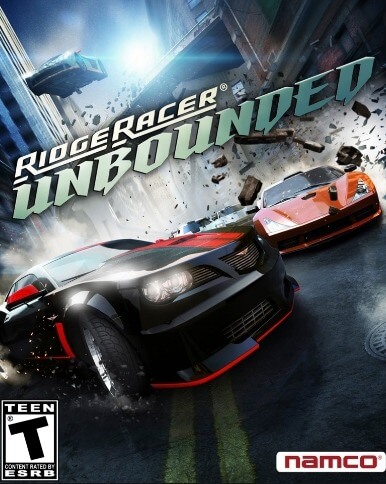 Ridge Racer Unbounded (リッジレーサー アンバウンデッド Rijji Rẽsā Anbaundeddo) is a racing video game for Microsoft Windows, PlayStation 3 and Xbox 360. It is the eighth installment of the Ridge Racer franchise, the game is published by Namco Bandai Games under the Namco label and developed by Bugbear Entertainment. Unbounded is the first game in the series to feature a Microsoft Windows version. Unbounded is also the last game in the series to be released on home consoles as its successors only focused on handheld devices.

Unbounded marks a departure from the traditional Ridge Racer drifting style, and moved to a more combat-oriented and destructive style, similar to the Burnout series, as well as implementing customizations.

Ridge Racer Unbounded offers a number of changes that depart from traditional Ridge Racer gameplay. Announced additions to the game include the ability to design and share tracks and a new emphasis on vehicular combat.

While Ridge Racer Unbounded was originally scheduled for release in North America and Europe in early March 2012, Namco announced a delay just before the planned release, stating that they wanted to allow more time "to pack the disc with features that will truly make the game sing." The game was released on 27 March 2012 in North America, 30 March 2012 in Europe and 5 April 2012 in Australia on all platforms. However, the Japanese release is so far unconfirmed. Despite this, the game seems to borrow inspiration from Critical Velocity (クリティカルベロシティ Kuritikaruberoshiti), a video game released in 2005 that was released only in Japan.

A free-to-play version called Ridge Racer Driftopia was announced on 12 April 2013. A beta version was released for Windows and PlayStation 3 in August 2013. On 19 June 2014, Bandai Namco announced that Driftopia had been cancelled, and the beta servers were shut down on 15 August 2014.

Set in a fictional city called Shatter Bay, racers gather to compete in no-rules, all-out street races. Competing for money and superiority in fast paced blasts through the streets dodging traffic and tearing through any obstacles that get in their way. A mysterious team led by a Japanese Hashiriya master, called "The Unbounded," appears playing a major role in the racing activity throughout Shatter Bay.

Ridge Racer Unbounded received "average" reviews on all platforms according to the review aggregation website Metacritic.

411Mania gave the PlayStation 3 version a score of eight out of ten, calling it "a welcome addition that fans of the genre should not ignore." The Digital Fix gave the Xbox 360 version a score of eight out of ten, saying, "Everyone involved deserves a huge pat on the back for Ridge Racer Unbounded - Namco for having the stomach and recognition for change and Bugbear for reinventing an aging and tired series." The Guardian gave the same console version a similar score of four stars out of five, saying that its frustrating moments "are far outweighed by the deeply satisfying ones. It's anarchic, well designed, thrilling to behold and will put a massive grin on any true petrol-head's face." The Daily Telegraph likewise gave the same console version four stars out of five, saying, "The problem with Unbounded is that it doesn't seem comfortable sharing its secrets with you. It's called Ridge Racer, it looks like Burnout, and anyone who has played an arcade racer will, not unreasonably, expect a certain handling model...Unbounded is not that game."

However, Digital Spy gave the same console version three stars out of five, saying that it "lacks the sparkle of games such as Split/Second or Burnout. The destruction elements feel a bit weak, the cars control poorly at times and the computer AI is truly merciless. The biggest problem, though, is the lack of a proper tutorial in the game, a sure-fire way to alienate many players almost instantly." Destructoid gave the Xbox 360 version 5.5 out of ten, praising its "surprisingly good map editor", but criticizing the level design and the poor lighting conditions during sunset scenes, stating that "the lighting makes driving much harder than it needs to be," and suggesting players play the 2010 Need for Speed: Hot Pursuit game instead.