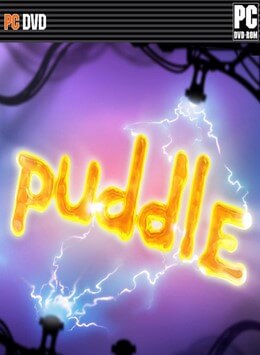 In the game, the player must guide a puddle of fluid to its target destination by tilting the scene, not by moving the fluid itself, similar to Nintendo's WiiWare game Fluidity. They must work with physics: friction, momentum, and the unique properties of each type of fluid and environment to send as much of each puddle past such obstacles as fires, rifts, spills and others, through environments like pipes, plants, laboratories, a human body, a sewer, a rocket, a foundry and a power station. The experience is physics based, making the fluid motion realistic. The game allows you to be a liquid like Nitroglycerin, and you need to guide it to a certain point. Nitroglycerin tends to explode, so the player must learn to carefully guide it.

Puddle received generally positive reviews from game critics. Rick Lane of PC Gamer, who gave the game an 80/100 score, stated: "Addictive, if soon over. An intoxicating cocktail of molten merriment, Puddle is a glass-half-full kind of game."