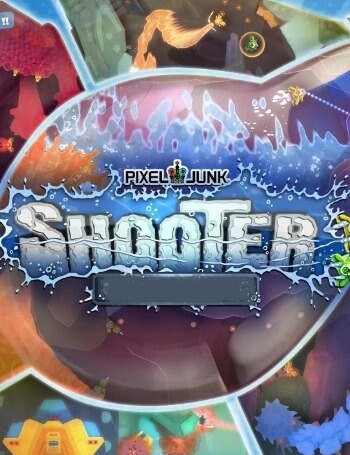 In PixelJunk Shooter, up to two players can control their own subterranean vehicles to rescue a number of surviving scientists trapped underground. Using their ships' missiles, players can defeat enemies and destroy weak rock to progress through the environment. In addition to rock and ice, players must manipulate three types of fluid (water, magma, and ferrofluid) in order to reach the survivors. Once each survivor is rescued or killed, players may progress to the next part of the stage. If too many survivors are killed, players are forced to quit or restart the stage. The game has fifteen stages divided evenly among three "episodes", each episode ending with a boss encounter.

PixelJunk Shooter was formally announced during a 2009 pre-E3 press event on April 29, 2009. Originally referred to as PixelJunk 1-4, a 13-day contest was held in which fans submitted game title suggestions to Q-Games. The official title, PixelJunk Shooter, was announced on May 25, 2009. The simplistic name was received negatively by some fans to which Q-Games president Dylan Cuthbert explained that the name was chosen not only for its simplicity, but also because shooting is the game's central mechanic ("Shooting jets of magma, shooting streams of water, shooting enemies, missiles, lasers, plasma spread weapons etc.") Several other titles were considered, including "PixelJunk Elements", the most popular submission. Ultimately, "Elements" was dismissed because "it didn't sound action-packed enough".

PixelJunk Shooter is the first title in the PixelJunk series to offer a traditional narrative, conveyed to players through a series of speech boxes awarded upon rescuing certain survivors. The game's soundtrack is made up of songs by High Frequency Bandwidth, composed by Alex Paterson and Dom Beken.

The same console version was praised by critics for its level design and unique physics; 1UP.com lamented that said console version did not include a "sandbox" mode wherein players could experiment with its various fluid substances. The music of High Frequency Bandwidth was also praised, described as "a funky, dynamic collection of upbeat trip-hop" by Eurogamer.

Critics were not uniform in reception of the same console version's combat. While Eurogamer praised the enemies as "cunningly-designed", GameSpy remarked that the combat experience overall "isn't all that interesting".

Several reviews made note of said console version's brevity; GameSpot called it "ultimately too short for its own good, abruptly ending just when you're getting into a groove". Other reviewers were less critical of its length, noting that the story concludes with a "To Be Continued" screen, suggesting an "Encore" expansion was likely (similar to those released for PixelJunk Monsters and PixelJunk Eden). Rather than an expansion, a standalone sequel was announced by Q-Games.