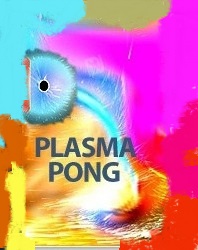 Plasma Pong is an indie video game created by American developer Steve Taylor. In 2007, the game was put on hiatus in 2007 ("Cease and desist") to respect Atari's Pong trademark.

Plasma Pong is a clone of Pong, in which two players control a paddle each, at either side of the screen, volleying a ball between them. The environment is a fluid-like plasma which can be pushed and sucked with the paddles.

There are three game modes in Plasma Pong. In single player, the player combats a progressively smarter AI in a fluid environment where the fluid moves faster and faster, affecting the ball more and more. Multiplayer is little different, with two players typically sharing a single keyboard to play against each other. The sandbox mode, however, gives the player near total access to color, particle, and fluid motion effects, allowing them to simply play around with the game's fluid dynamics engine and see what interesting motions they can create.

Wired News considered Plasma Pong to be one of the best indie games of 2007. They highlighted the complex but manageable gameplay and beautiful graphics, but criticized the occasionally unpredictable ball control.

The Washington Post made a long article about Plasma Pong in June 2007.

Later, a HTML5 remake was made by another author.