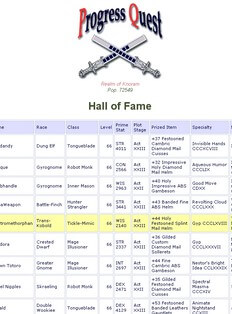 Progress Quest is a video game developed by Eric Fredricksen as a parody of EverQuest and other massively multiplayer online role-playing games. It is loosely considered a zero-player game, in the sense that once the player has set up their artificial character, there is no user interaction at all; the game "plays" itself, with the human player as spectator. The game's source code was released in 2011.

On starting a new game, the player is presented with a few options, such as the choice of race and character class for their player character. Stats are rolled and unrolled to determine Strength, Constitution, Dexterity, Intelligence, Wisdom, and Charisma. Players start off with subpar equipment, eventually earning better weapons, armor, and spells. Almost none of the above-mentioned character statistics and equipment have any effect on gameplay, however. The only exception is the Strength stat, which affects carrying capacity, indirectly influencing the speed of level gain.

After character creation the game runs its course. The game displays the character's stats on the screen, including several progress bars representing how far the player character has advanced in the game. The lengthy, combat free prologue is represented by a set of progress bars, each accompanied by a line of text describing, among other things, the "foreboding vision" the character has. Then the first act begins, and the character is "heading to the killing fields..." where they will start the endless cycle of "executing (number of monsters) (adjective of monsters) (monster type)" or "executing a passing (player character)", only disrupted when their strength is no longer sufficient to carry more items. This forces their return to the market, where they will sell all the loot (each group of monsters drops one monster-specific item of loot, player characters will drop random magic loot) and then spend all their accumulated money to buy equipment. With each group of monsters "executed" the quest progress bar will advance one step; once it is filled it will be reset and the player awarded either with a magic item, a piece of equipment or a stats upgrade including the learning or leveling of a spell. After a fixed amount of time, the player will enter a new act, which has no effect whatsoever.

All equipment in the game is randomly given out as a reward for several instances in the game such as completing a quest, killing certain enemies, leveling a character, and especially when at the market, in which the character uses gold from the loot to upgrade his or her equipment. These items usually consist of two adjectives and a noun. Like the games Progress Quest mocks, these items have statistics and the adjectives are variables describing the item. The character level is used to determine what stats and adjectives each item has.

Players may choose to create an account offline for their own enjoyment, or create an online account that allows their character stats to be saved on a ranking website. This allows characters to compare their accomplishments with others while trying to achieve a higher ranking on their respective realm. Players can also join guilds of Good, Neutral, or Evil alignment in certain realms, though there is no benefit for doing so.

The story tells of the history of Grumdrig and the creation of the realms. Currently, there are five realms: Knoram, Expodrine, Oobag, Spoltog, and Pemptus. The latter two are still open, but Knoram, Expodrine, and Oobag were permanently closed to the creation of new characters upon the arrival of Pemptus, which, being the newest realm, launched on February 8, 2007. The story mimics convoluted fantasy plots, using archaic and made up words such as "aberdoxy".