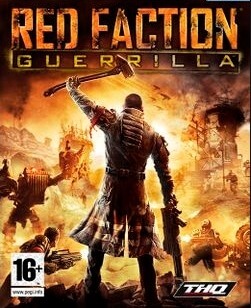 Red Faction: Guerrilla is a third-person shooter video game developed by Volition and published by THQ. It was released for PlayStation 3 and Xbox 360 in June 2009 and for Microsoft Windows in September 2009. The game is the third installment in the Red Faction series. Several years after release, Destructoid listed the game as one of THQ's ten best. A remastered version titled Red Faction: Guerrilla Re-Mars-tered with improved graphics was released worldwide on July 3, 2018, for Microsoft Windows, PlayStation 4 and Xbox One, and later on July 2, 2019 for Nintendo Switch.

Red Faction: Guerrilla is a third-person shooter game set in an open world environment. The player takes the role of Alec Mason as he assists the Red Faction to overthrow the oppressive Earth Defense Force (EDF) on Mars. Developer Volition changed the camera perspective to help the player see and appreciate the surroundings as they are destroyed.

Unlike the previous Red Faction game, which used the Geomod engine, Guerrilla does not allow for the destruction of terrain. However the game's Geomod 2.0 engine allows for buildings, cover, and other structures to be destroyed. This allows a degree of creativity in approaching a given objective, such as breaking or crashing through structures, or leveling multi-story buildings and large bridges or catwalks to thwart the enemy. In many cases, destroying buildings will leave behind salvage, the game's form of currency, which can be used along with salvage rewarded by completing missions to unlock and upgrade weaponry and technology at safehouses. During the campaign, the player is always equipped with a sledgehammer-like weapon, along with three slots for other weapons and explosives, selected out of a choice of almost twenty items. The player also has the opportunity to control armed vehicles ranging from retrofitted civilian vehicles up to tanks and large walkers for more destructive options against the EDF.

The game's open world represents a terraformed area of Mars surface. The world is divided into six distinct areas and the player must successfully free each area from EDF control before moving onto the next. As the player travels through as-yet-unfreed areas, they will be attacked by EDF forces if they are spotted by patrols or commit aggressive actions. Each area also contains one or more safehouses staffed with Red Faction guerrillas, where the player can re-arm or change his weapon loadout, and spend salvage to purchase upgrades to his weaponry and equipment. The player can traverse the world on foot or by appropriating one of the numerous vehicles. Navigation is provided by a mini-map with GPS indicator which can be set to direct a player to a location of his choice using a zoomable full-screen map mode. In order to liberate any given area the player must complete a variety of missions to reduce the EDF's presence, referred to as "EDF control". At the same time, the player can complete various side missions, such as rescuing hostages, destroying enemy-held facilities, defending locations from attack, and delivering vehicles. Rewards for tasks come in the form of salvage, reduction of EDF control, or increase in the morale of the populace to resist EDF domination. Other actions, such as letting civilians die, will lower morale, while actively killing civilians will lower morale faster. Should the player engage EDF forces in a sector with high morale, teams of Red Faction guerrillas will likely arrive to fight alongside the player. Once the player has worn down the EDF presence in a sector to zero, a plot mission will become available in which success will drive the EDF out and allow the player to secure the sector. Once this has been completed for a sector it will be freely traversable, with little danger of EDF conflict. Meanwhile, the story of the game progresses along with the liberation of successive sectors.

As the players engages in more matches, they gain experience points that will grant them bonuses; most of which take the form of superficial bonuses such as the option to add more features to character models or altering aspects of their player emblem, and have no impact on the game. Other bonuses grant players access to additional gameplay modes.

The multiplayer modes also use Geomod 2.0 and the same weapons available in the game. An added feature exclusive to the multiplayer mode however, are special backpacks that grant players a unique, temporary power. Such powers include the ability to run faster, fly, burst through walls, or send out a concussion wave. Another additional device in the multiplayer games is the Reconstructor, a weapon-like object that uses nano-technology to rebuild destroyed structures. It is a key device in game modes which require players to attack or defend specific structures. There are six game modes, including typical multiplayer modes such as individual and team Deathmatch and Capture the flag. Other modes focus on attempting to destroy or preventing the destruction of structures. "Siege" for example requires one team to try to destroy buildings controlled by the other as fast as possible. After a set period of time, or once all targets are destroyed, the roles are reversed, and a new round begins. The team that manages to destroy all targets the fastest wins the round.

Along with online multiplayer, there is an offline only "pass the controller" multiplayer game mode for one to four players called "Wrecking Crew". Wrecking Crew features several different modes, all of which are based around causing as much damage by oneself in each round with a set amount of resources

Red Faction: Guerrilla takes place in the year 2126. The Earth Defense Force (EDF), the allies in the original Red Faction, have become the main antagonist of Guerrilla. Although initially supportive of the Martian miners, Earth's natural resources have run scarce, and as a result, its world economy has collapsed from rampant speculation of commodities and lack of production. Under pressure by Earth's corporations and leaders to acquire the resources of Mars at any cost and at a pace to meet Earth's high demand, the EDF has forced Martian society into a permanent state of unfree labour. The newly reformed "Red Faction" arises to revolt against the EDF, drive them off the planet, and begin fairer negotiations with Earth.