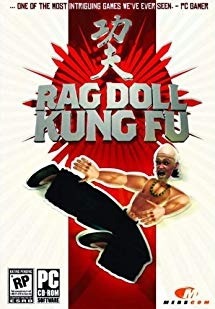 Rag Doll Kung Fu is a fighting video game, created predominantly by artist Mark Healey, while working for Lionhead Studios, along with other Lionhead employees, such as David Smith and Alex Evans. Rag Doll Kung Fu is available from Valve Corporation's Steam content delivery platform. It is notable as the first third-party published game to be released on Steam. An updated version, called Rag Doll Kung Fu: Fists of Plastic was made available for download on the PlayStation Network for the PlayStation 3 on 9 April 2009.

The game features string puppets that allow for complete control over their hands, arms, and the like. The game is played with the mouse. An online multiplayer feature has been added to the game as well.

The project was announced during an interview with Mark Healey by LHTimes. In the interview, Healey explained that the game was started after he and a few friends made a £50 kung fu film, and Healey felt a game should go along with it. Healey created a site dedicated to Rag Doll Kung Fu on the Lionhead Studios server. In late 2005 Healey, David Smith and Alex Evans left Lionhead Studios to form Media Molecule.