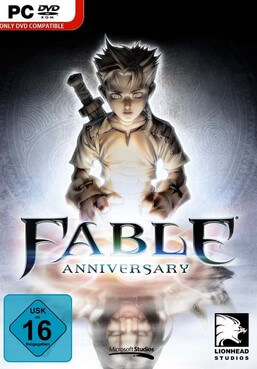 Lionhead Studios announced Fable Anniversary, a remastered version of Fable: The Lost Chapters, for release on the Xbox 360 later in 2013. It features overhauled graphics and audio, a new save system and incorporates Achievements. On 13 September, Ted Timmins, lead designer of the game, announced that the game's release date will be pushed back to February 2014. Later that year on 12 December 2013 the release date was announced as 4 February 2014 in North America, 6 February 2014 in Asia and 7 February 2014 in Europe. On 2 June 2014 the game was also confirmed to be coming to PC. Fable Anniversary was in full development for 15 months. The game featured graphical upgrades in many areas over the original most notably; native widescreen support, higher polygon count, larger textures, specular maps, normal maps, improved lighting, improved shadows, and a larger draw/detail distance.

It was released on Steam on 12 September 2014 and includes mod support. Upon release it garnered mixed reviews. Many reviewers praised the new graphics, but bemoaned that old bugs from the previous version of the game hadn't been fixed. It received 68% on the review aggregation website, Metacritic.

All games from the serie "Fable"

Wik and the Fable of Souls
hit
upd
new