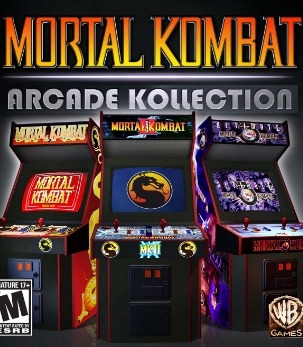 The game is a compilation of the first three Mortal Kombat games. Along with a few very minor changes to them, it features online multiplayer, pause menus, achievements, also making unlockable characters always available in online mode.

The game was originally conceived as an HD remake of the early Mortal Kombat games, featuring remade character sprites, new backgrounds and new user interface system, before the scope of the project was changed. Known as Mortal Kombat HD Arcade Kollection, it was supposed to be made by Other Ocean Interactive, the studio that has created Ultimate Mortal Kombat for the Nintendo DS. This canceled project was never even officially announced before it was canceled, and a simple compilation of original games was released instead of it, also created by Other Ocean.

Graphical assets, such as Zbrush models for the Animalities and Mileena's unmasked, face have been since leaked by the artist Jeremy Kohar in 2013. Previously, more concept art from the project were revealed by the artist John Montenegro. In 2014, make-up artist Tanea Brooks released pictures of herself helping the new actors for Liu Kang, Kitana, Kung Lao, Shao Kahn and Sonya Blade prepare for a shooting session for HD Kollection.

Another attempt at re-editing the original trilogy in HD was made by Blind Squirrel Games, but was also cancelled before it came to be.