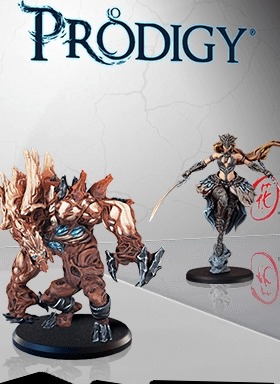 Prodigy is a tactical role-playing video game under development by Hanakai Studio. The game features figurines representing characters in the game and uses cards to control their behaviors, such as attacking. Both cards and figurines are placed on a game board, with their position on the board influencing their powers and abilities. After an initial release date set in 2015 and not in 2016, the studio announced that Prodigy's release would be delayed due to an upgrade of its gameplay system. A Kickstarter campaign to fund the game's alpha and beta phases began in April 2014, with a $100,000 funding goal. It reached its goal in just three days, eventually collecting $200,000 from over 1,000 backers. It was released on September 2018.

Prodigy is a tactical role-playing game played with figurines representing game characters placed on a 3x4 board. The board uses near field communication (NFC) technology. Each square on the board's grid gives different capabilities to the characters in the video game. The front row gives offensive bonuses, while the back row gives defensive bonuses. The middle line is neutral. Characters can be moved freely around the board, with no action points or other forms of limitation. There has been an initial group of 23 figurines for the game.

The player places Arcana cards on the game board to make characters perform actions such as attacking. Combinations of cards placed on the board trigger special actions unique to each character. Special skills, unlike normal actions, require mana.

Prodigy includes a large single-player campaign including boss battles, as well as competitive multiplayer. In both modes, the player's team is controlled through the figurines, while the opponent's or IA's team is displayed on the video game screen.