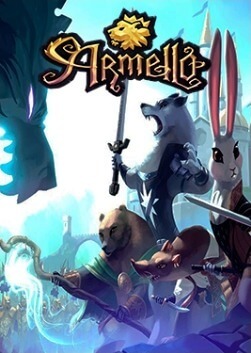 Armello is a digital role-playing strategy board game developed by Australian independent game studio League of Geeks as their debut project. First announced as an iPad title in September 2012, the game has been in development since mid-2011, with music by composers Lisa Gerrard and Michael Allen. Between April and May 2014, a successful Kickstarter campaign was created to help fund a port to Steam and GOG.com, as well as stretch goals to bring the game to Android and Windows tablets. The game was also chosen to receive additional support from governmental funding agencies Screen Australia and Film Victoria.

Set in a fantasy world filled with anthropomorphic animals, up to four players assume the role of a hero chosen among their clan to take part in a campaign to become the next king or queen. The game features turn-based board-game mechanics that revolve around the use of dice and cards that are drawn from a deck, with each player's actions influencing the outcome.

Armello is a digital simulation of a traditional fantasy tabletop role-playing game utilizing virtual dice and cards which allow the player to carry out specific actions. Up to four players assume the role of a Hero character that represents a specific animal clan, each with their own unique strengths, with the ultimate goal to storm the castle and become the new king or queen of the kingdom. The playing board area is divided into hexagon-shaped tiles that contain randomly generated features such as dungeons to explore, quests to complete, rival heroes to battle, or settlements to capture. As the game progresses, players can acquire currency to purchase additional abilities for their hero using a talent tree system specific to each character.

The game uses a turn-based system where players are allowed to perform actions such as equip items and purchase talents during another player's turn to reduce downtime. Cards and dice are used to directly interact with the game world, and form the basis for the game's combat system. Players use cards they draw from a deck to cast spells, recruit followers, heal wounds, or use items that grant special abilities. Cards may also be played as "Perils" which can be laid on specific tiles to act as traps for other heroes or used immediately in combat, and other cards may be used to forge temporary alliances. Armello also features a day/night cycle where certain heroes gain advantages based on the time of day, and certain groups of enemies only appear in either the darkness or light.

The game takes place in the "dark fairy tale" Kingdom of Armello, a world filled with anthropomorphic animals separated into numerous clans. When the current king becomes corrupted by a dark force called the Rot, representatives from these faction rise up to embark on a journey to become the new king or queen in his stead.

While the game features eight heroes available to all players at launch, more will be added to the game over time. The initial characters include Thane, The Winter Wolf, a lupine warrior who carries a large sword; River the Howling Arrow, a wolf Archer; Amber, The Far Seeker, a rabbit armed with a short sword and umbrella; Barnaby Screwloose, a rabbit with custom made armor and a hammer; Mercurio, The Grinning Blade, a sneaky rat with a rapier; Zosha the Whirlwind, a rat assassin with a join-able pair of daggers; Sana, The Forest Sister, a bear who carries a staff of magic power; and Brun Oakbreaker, a Bear Shaman with a totemic club staff.

In December 2015, League of Geeks partnered with IndieBox, a monthly subscription box service, to produce a custom-designed, physical version of Armello. This limited, individually-numbered edition included a flash-drive with a DRM-free copy of the game, the official soundtrack, an instruction manual, Steam key, and several custom-made collectible items.