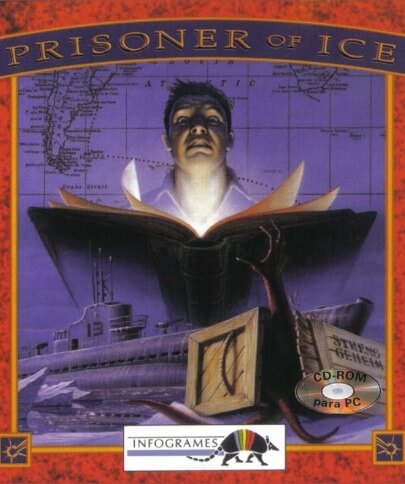 Prisoner of Ice (also Call of Cthulhu: Prisoner of Ice) is an adventure game developed and released by Infogrames for the PC and Macintosh computers in 1995 in America and Europe. It is based on H. P. Lovecraft's Cthulhu Mythos, particularly At the Mountains of Madness, and is a follow-up to Infogrames' earlier Shadow of the Comet. In 1997, the game was ported to the Sega Saturn and PlayStation exclusively in Japan.

Prisoner of Ice begins during the run-up to World War II, primarily around Antarctica. The main character is a young U.S. intelligence officer, Lt. Ryan, who has been assigned to a British submarine, HMS Victoria, for a special mission. As the game begins, the submarine is fleeing the Antarctic after rescuing a Norwegian who has recently escaped from a secret German base in the Antarctic (it is later revealed that the base is built atop the Ancient Ruins mentioned in At the Mountains of Madness). Along with the Norwegian, the sub has picked up two mysterious cargo crates stolen from the Nazis.

The game has a choice of two endings, though there is little difference between them.

The game involves solving puzzles through a point and click user interface. The player can examine any item and, depending on the item, either pick it up, use another item on it, or operate it in some way.

Some puzzles, if not completed within a short span of time (always less than a minute), will result in a game over. To ensure that the player does not get stuck by saving their game at a point from which they cannot possibly complete a puzzle in time, the game autosaves onto a separate save file at the beginning of each timed puzzle.