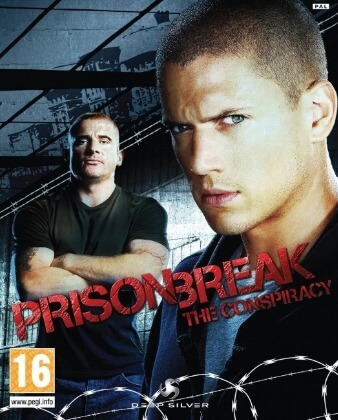 Prison Break: The Conspiracy is an action-adventure video game based on the first season of the Fox television series Prison Break, released for Microsoft Windows, Xbox 360 and PlayStation 3. Some actors from the show reprise their roles.

Prison Break: The Conspiracy is based on the events of the first season of Fox's convict drama. However, rather than playing as main character Michael Scofield, players instead take control of Tom Paxton, an agent with covert organization 'The Company', who must go undercover as a prisoner within Fox River State Penitentiary in order to ensure that the falsely incarcerated Lincoln Burrows be executed in the electric chair. The game is split into nine chapters, all of which represent a part of the real story that the TV series followed.

The game was released in Germany on March 19, 2010; through the rest of Europe a week later; in North America on March 30 for the PC and PS3 versions, and on April 1 for the Xbox 360 version; and in Australia on April 12. The game had been in development for PlayStation 3 and Xbox 360 for release in February 2009, but was canceled when Brash Entertainment closed down. However, ZootFly continued the development and self-funded the project for 13 months. Once the game was polished and nearly finished, it was picked up by new publisher Deep Silver.

The game received "generally unfavorable reviews" on all platforms according to the review aggregation website Metacritic. The Daily Telegraph described the Xbox 360 version as "an abject failure on all counts."